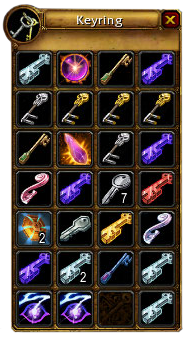 The keyring took the form of a sixth bag slot which held a number of keys, most usefully dungeon keys among other keys, with dynamic capacity. Not all keys or items with key in their names were compatible with the keyring.

When a player first acquired a key, they would automatically acquire a keyring that would hold compatible keys. The keyring sized dynamically for the number of keys in possession, up to 32 keys.

Event Dungeon Keys (available and used for access to parts of the dungeon, one-time use)Edit

Incompatible "Keys" (cannot be placed in the keyring)Edit

Retrieved from "https://wowwiki.fandom.com/wiki/Keyring?oldid=2860511"
Community content is available under CC-BY-SA unless otherwise noted.