in the Twilight Highlands. He serves as commander for the Patrol and was instrumental in saving its citizens from attack by fire elementals.
He also appears further north in the zone at Kirthaven

at a summit where the Wildhammer clan was supposed to unite. Due to unresolved conflict between the Firebeards and Thundermars, the summit falls apart. Keegan later helps bring the dwarves together by marrying Fanny Thundermar, despite interference by the Twilight's Hammer clan. He became smitten with her when he rushed into Glopgut's Hollow to rescue her from the ogres, but found she had defeated her captors quite handily.

As a gesture of his seriousness in bringing the Wildhammers together and bringing them into the Alliance, Kurdran Wildhammer presents Keegan with the egg of his famed, deceased gryphon, Sky'ree, as a wedding gift. 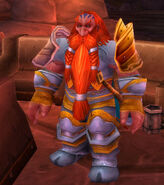 Keegan at Kirthaven.
Add a image to this gallery