Kargath Bladefist"combat" is not in the list (Alliance, Boss, Horde, Neutral, Combat) of allowed values for the "NPC faction" property.

When the first wave of clans went through to Azeroth, Bladefist begrudgingly stayed behind in Draenor, under the uneasy rule of Ner'zhul the Shaman, who only remained in power through his numbers – and the always-looming threat of the Ogre-Mage Dentarg. When the Bleeding Hollow Clan returned to Draenor many years later, Bladefist immediately volunteered to send his clan through to Azeroth, hoping to gloriously slaughter the humans to avenge his fallen or captured brothers and sisters.

However this may not have happened as the game was cancelled and haven't been referenced in any source. It does not appear in the Lord of the Clans novel. Alot more recently, it has been confirmed that he was not infact trapped on the Azeroth side of the portal, and is still in Hellfire Citadel, under the commanding the Fel Horde, and being commanded by the Illidari.

Kargath Bladefist will be making an appearance as one of the Warlords of Draenor in World of Warcraft in its fifth expansion of the same name, and chieftain of the Shattered Hand clan. Along with the other chieftains he will appear in a time before Draenor's destruction. He will rule over the land known as the Spires of Arak. 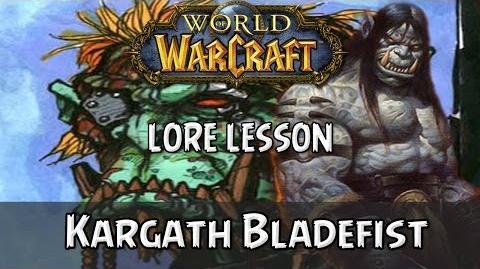