Kalidar was the name Blizzard had originally used (on their website) for the island off northwest Kalimdor where Teldrassil was grown. The night elves moved their capital to this island. The Circle of the Ancients and the wise druids pooled their power to create a great tree akin to the World Tree, but on a smaller scale. The tree eventually outgrew the island[1][2] and the night elves built their city of Darnassus atop it. The island now takes the name of the tree as well, and a twilit forest covers it.[3]

Taken directly from the official site: 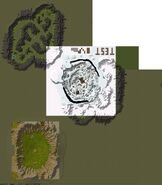 Minimap file titled "Kalidar".
Add a image to this gallery

It is possible that the backstory of the island originally being called "Kalidar" was later dropped. The Warcraft RPG neither denies the name Kalidar, nor states that it was named Kalidar before it was named Teldrassil. However, the RPG confirmed that the island did later take on the name Teldrassil, named after the great tree that grew on it.

Furthermore, the European townhall was updated to have all references to "Kalidar" replaced with the word "Teldrassil",[4] and the US townhall has been taken down.

Retrieved from "https://wowwiki.fandom.com/wiki/Kalidar?oldid=2643124"
Community content is available under CC-BY-SA unless otherwise noted.