The Annihilator
The Deciever
The Dragon
The Beast

Kalaran is a mighty drake of the black dragonflight. Initially, he appears in the guise of a human known as Kalaran Windblade, a level 55 quest giver located southeast of Thorium Point in the contested territory of Searing Gorge.

He tells a tale (fabricated, of course) of his father having been slaughtered by Dark Iron dwarves, and urges adventurers who cross his path to help him avenge his death.

When the quests are completed, he turns into his true form of Kalaran the Deceiver and yells "The legion of Blackrock comes, dwarflings! We shall scorch the earth and set fire to the heavens. None shall survive..." indicating he is one of the drakes who are with Nefarian — due to the fact that Nefarian constantly fights with the Dark Iron dwarves specifically for control of Blackrock Spire.

Fortunately for those who take his quests, he refrains from killing them after revealing his true form. He even commands his servant to throw them some "trinkets" such as [Axe of the Ebon Drake], [Dragonflight Leggings] and [Drakefire Headguard], before flying off to scorch the earth and set fire to the heavens as mentioned above.

World of Warcraft: The Comic

Kalaran makes a brief appearance in the comic series. As Kalaran Windblade, he is posing as a spy in the service of Ironforge against the Dark Iron dwarves. When the missing King Varian Wrynn appears at the Gates of Ironforge, Kalaran attempts to assassinate him but is stopped by Valeera Sanguinar. In his anger, Kalaran disposes of his human guise and reveals his true form before being chased off by King Varian.

Kalaran returns in Cataclysm as a full grown black dragon named Kalaran the Annihilator. His death is an objective of The Wrath of a Dragonflight. 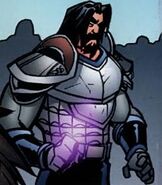 Kalaran in his human guise.

Kalaran in his true form.
Add a image to this gallery

Retrieved from "https://wowwiki.fandom.com/wiki/Kalaran?oldid=2856055"
Community content is available under CC-BY-SA unless otherwise noted.