K'ara is a naaru who arrived on Draenor with the draenei ship, Genedar centuries ago. K'ara was ejected from Genedar as it fell to the surface and crash-landed. Presumably as a result of the crash, K'ara shifted into the void phase of the Naaru life-cycle. As a result of the void-like appearance and the fact that K'ara fell from the heavens, orcs of the Shadowmoon Clan refer to K'ara as The Dark Star.

The Shadowmoon Clan and The Dark Star Edit

After a time, some members of the Shadowmoon Clan attempted to use the powerful void-magics of the darkened Naaru, but it caused them to become corrupt, arrogant and to defile the spirits of their ancestors. This act was a direct contradiction of the shadowmoon clan's tradition of preserving the sanctity of their ancestral spirits, so the clan's chieftain outlawed the practice of shadow-magic entirely.

Ner'zhul and the Iron Horde Edit

In response to the rise of the Iron Horde, Ner'zhul began an attempt to harness K'ara's void energies so his clan could find a place serving the Iron horde, instead of being crushed by it. This involved the sacrifice of countless Draenei to accomplish his goal and continued for quite some time until the events in

In Shadowmoon Valley of Draenor Edit

While questing in Shadowmoon Valley, Alliance players hear mention of The Dark Star and are eventually made aware of the existence of K'ara by Velen.

After players help remove barriers which were preventing Velen's prophetic abilities, they share in one of his visions where he witnesses the final attack on Karabor. In the vision, Karabor falls to the Iron Horde when Ner'zhul is successful in summoning The Dark Star. In the vision, all of the Alliance and Draenei forces are killed including Velen himself.

Velen decides to make a preemptive strike against Ner'zhul, trying to stop him from summoning The Dark Star. He fails by a few moments, but chooses to sacrifice his own life in order to purify the Dark Star, returning K'ara to a being of light.

After Velen's purification ritual, K'ara takes a while to recuperate. Players are tasked with defending Karabor while K'ara charges to full strength. The battle for Karabor ensues and after several minutes, K'ara unleashes a powerful attack, decimating the Iron Horde attackers. 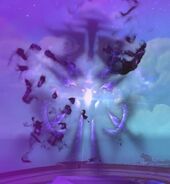 Purified K'ara unleashing a devastating attack against the Iron Horde at the battle for Karabor.
Add a image to this gallery

Retrieved from "https://wowwiki.fandom.com/wiki/K%27ara?oldid=2767736"
Community content is available under CC-BY-SA unless otherwise noted.