Chieftain of the Blackrock Clan

Jubei'Thos, a fel orc blademaster, took up leadership of the Blackrock clan orcs in Lordaeron during the Third War. Jubei'Thos didn't join Thrall when he made the new Horde, because of his devotion to the Burning Legion and acceptance of Warlocks in his Clan, something Thrall wouldn't accept.

Jubei'Thos considered Thrall weak and manipulative, and that any true challenge to this 'New Horde' would wipe it out utterly.

Note: It is unknown how or when he was transformed into a fel orc.

Jubei'Thos and the Blackrock warlocks sensed that the second coming of the Burning Legion was at hand, and took steps to prepare. He has great faith in the strength of the Orcish people and that only through their loyalty to the Burning Legion would they be redeemed. He rallied the fragmented Blackrock clan of Lordaeron under his power and directed them to bring chaos to Lordaeron.

The Blackrock clan built a Demon Gate to communicate with their demon masters. When Kel'Thuzad was reborn as a lich, he found out that the Demon Gate was needed to commune with the demon lord Archimonde. In an effort to reclaim it Arthas and Kel'thuzad battled the orcs guarding it. Jubei'Thos and his orcs believed that the Scourge was an impure race to the demons, and that his people were truly the chosen of the Burning Legion. Jubei'Thos and his clanmates died defending the gate against Kel'thuzad and Arthas.[2]

It is unknown how this group of the Blackrock clan is related to the Dark Horde. As their leader is different, fights for different causes (Jubei'Thos fights for the Burning Legion, whilst Rend Blackhand basically is still fighting the Second War against Stormwind), and were formed at different places and times it is very likely that they are not related.

Violent and erratic, his devotion to the Burning Legion drove him to assume leadership, this coupled with his cunning and skill as a swordsmen allowed him to rise to role of chieftain. 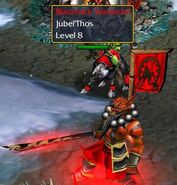 Jubei'Thos in Reign of Chaos
Add a image to this gallery

Retrieved from "https://wowwiki.fandom.com/wiki/Jubei%27Thos?oldid=2859533"
Community content is available under CC-BY-SA unless otherwise noted.