Leader of the Bilgewater Cartel

Immediately prior to the Cataclysm, Gallywix was on the verge of losing his Trade Prince status due to player characters trying to take over. The players were appointed by Gallywix as second-in-command many years prior, but he later sensed the players were a threat. As luck would have it, he was the only one that owned a ship at Bilgewater Port at the time Deathwing triggered Mount Kajaro's eruption, and he seized upon the opportunity to take advantage of the populace. Charging an exorbitant amount of money, he happily took his people's life savings, offering them a ride to safety. His plan was to actually sell those into servitude that conspired against him. En route, the ship passed by a battle between the Alliance and Horde just off the coast of the Lost Isles. Rather than risk witnesses or additional attackers, the Alliance sank their vessel.[2]

Gallywix survived the destruction of his ship, utilizing one of his few escape pods. He was the first to be rescued, and offered a small thanks. He continued with his grand scheme of regaining power via various means, such as enslaving his fellow goblins and members of the Bilgewater Cartel to mine for kaja'mite in the Gallywix Labor Mine. His plans are foiled when the goblins escaped and teamed up with Thrall, whom they rescued from the Alliance. Gallywix, recognizing Thrall possessed much more power than he, decided to surrender and pledge his allegiance, and the Bilgewater Cartel, to the Horde. Gallywix promised the Warchief he would run the Cartel differently, and Thrall promised him the land in Azshara for the goblins' new home.

When the goblins used their engineering skills to carve out a district in Orgrimmar and reform the Azsharan landscape, Gallywix was strangely nowhere to be found. Later, he appeared in the Horde ending cinematic of Mists of Pandaria. When Vol'jin was proclaimed Warchief by Thrall, Gallywix and the other Horde leaders bowed before him.

This article or section includes speculation, observations or opinions possibly supported by lore or by Blizzard officials.*
Many people find it strange that Thrall appointed Gallywix as leader, given the story arc of the goblin starting experience. Even many of the Bilgewater goblins are portrayed as hating Gallywix and thinking of him as a traitor; ironically, they were planning on offing Gallywix before the eruption of Kezan. In a starting quest, one goblin even calls him a monster and expresses horror at the possibility of his survival. Some of Gallywix's more controversial actions can be found below, though there are notes that reflect how these same traits are shared by the players and other goblins, suggesting he may have merely been a more extreme representation of typical goblin culture:

The last is especially strange, though Thrall may have spared Gallywix and let him retain his leadership position for a number of reasons. The first is that Thrall is familiar with goblins and their culture; not only would he view Gallywix's attempt as "normal" to some extent, but would also have known that, once cowed, the goblin would not have attempted such an action again.

Another possibility is that he saw in Gallywix someone who would not mindlessly follow Garrosh. Gallywix could be counted on for one thing, and that was looking out for his own interests. Such a wild card could either upset Garrosh's plans or, at the very least, provide Thrall with an insider who owed him a debt of gratitude.

Excerpt from the short story The Blank Scroll Edit

This Gallywix wore no riches and wasn't smiling at all. "Maybe you don't know him like I do," Druz had said… Druz straightened beside her.

"This is it, boss," he said thickly, and he tossed the scroll onto the workbench. Gallywix didn't touch it.

"The Lorewalker?" he said.

Guilt washed over Ziya. She had seen the bullet fly. Shuchun was gone. She had to be.

"Too bad," Gallywix said, and he nodded at the scroll. "What is it?"

"Apparently it's a kind of portal that makes stories real," Druz said. "Things got out of control before the Lorewalker could explain more."

The trade prince considered the scroll. Ziya braced herself for whatever terrible thing—

"Sounds like bad news," Gallywix said. "I'll put it in the lower vault when we get back to Azshara."

"Boss," Druz said, almost pleading. "If you don't use it, someone else will."

"You know what I'm gonna say," Gallywix said, glancing at him.

"Good. The last thing we need is another big gun floating around," Gallywix said. "Get it outta here."

"And that's it?" The words were in the air before Ziya realized she had spoken them.

Gallywix regarded her. She could see the gears turning in his head.

"What did you expect, Sergeant?" he said.

"I expected you to use it!" Ziya growled. "It's what you do. You use things. You're a monster!"

To her surprise, Gallywix nodded.

"You're exactly that kind!"

"No," Gallywix said. "We ain't ever met face to face, Sergeant, so let me explain. I don't mind selling you if you get careless. I'll send you to die if it'll help the cartel's bottom line. But I won't get you killed by stupidity or a big dumb weapon for nothing. That ain't me."

He glanced at the ring hanging around her neck. Her hands closed protectively around it. An unreadable expression crossed his face.

"For what it's worth," he said, "I'm sorry about what happened to your husband in Hyjal. But I ain't sorry about anything I've done. So, yeah, I'm a monster. But I watch out for what's mine. When I can.

"And right now, that means hiding this big gun before anyone finds out about it." 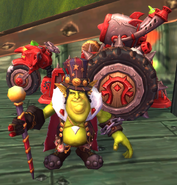 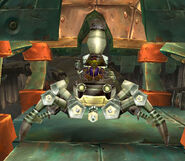 Gallywix after being rescued by players at Shipwreck Shore[27.9, 75.8]

Tim Moreels Gallywix
Add a image to this gallery

Retrieved from "https://wowwiki.fandom.com/wiki/Jastor_Gallywix?oldid=2853985"
Community content is available under CC-BY-SA unless otherwise noted.