Leader of the Bloodfang Pack

Packleader Ivar Bloodfang is a worgen and leader of the Bloodfang worgen group in Gilneas. Ever since the Shattering, Ivar made an alliance with lord Darius Crowley to overun the Forsaken. After this he and Crowley launch a mass of sneak attacks and ambushes on the forces of Sylvanas Windrunner at one point even killing part of her elite guard and almost killing the horde character along with them. When Sylvanas captures Lorna Crowley and uses her as a bargaining chip with Darius, Ivar is shocked at his immediate retreat and surrender going so far as to call him a miserable bastard before sprinting into the forest.

Before the Shattering, Ivar was among many Gilnean nobles, guards, or villagers that were inflicted by the curse and became the feral worgen that almost terrorized the entire nation. Eventually, he was among many that were cured by Krennan Aranas and served in Greymane's army. Earning his place as alpha, Ivar became leader of the Bloodfang Worgen and defended Gilneas when the Forsaken launched their assault under the command of Sylvanas Windrunner.

After most of Gilneas' population left and took refuge in Darnassus, Ivar remained behind with the Bloodfang pack and continued to fight against the Forsaken, ridding the plague, and getting their territories back that Sylvanas took. He had recently made an alliance with Lord Darius Crowley, who was also a worgen, and the two launched a massive attack on the Forsaken and managed to weaken their numbers and destroying their siege weapons to prevent them from destroying anything. However, their plan to go on had came to a halt when Sylvanas captured Lorna Crowley and used her as a bargaining chip with Darius. Ivar was shocked at his immediate retreat and surrender, going so far as to call him a miserable bastard before sprinting back into Gilneas.

Ivar believed that Darius was a disgrace to his kind for giving in to the Forsaken and decided to continue leading as many Bloodfang Worgen that were not willing to give up or surrender. Ivar held his high regards that he and his pack will show the enemy the true face of the worgen and will get their lands back or die trying. He is later seen working with the Stormpike forces on Purgation Isle. After leaving the Isle, he leads a group of his own to Shadowfang Keep where they plan to take down Lord Vincent Godfrey, who in turn betrayed both the Alliance and Horde. The mission was a success after adventurers managed to defeat Godfrey, and Ivar would lead his pack to finish off the Forsaken in the future.

As the Alpha male and leader of the feral worgen, much of the anger and ferocity associated with Goldrinn continues to exist within Ivar. He is a much harsher and more fearsome leader than Crowley or Greymane. Crowley's actions, which go against his personality as seen during the worgen starting experience, were likely influenced by Ivar, who seems to be willing to resort to more brutal tactics to deal with the Fosaken.

Despite Bloodfang's initial attitude of his joining Crowley and the Alliance as an alliance of convenience, but he seems to keep true to their pact even after Crowley's order to abandon and surrender Silverpine Forest. While his opinion of Crowley has been lowered, he seems to still be glad and very willing to work with the Alliance, as seen inside of Shadowfang Keep, and his delegations with the Stormpike clan in Hillsbrad.

-only quests from Packleader Ivar Bloodfang in Shadowfang Keep:

Note: As each boss is killed, Ivar will offer the next quest in the list above.

prior before Warlords of Draenor. 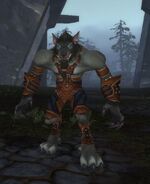 post-Warlords of Draenor.
Add a image to this gallery

Retrieved from "https://wowwiki.fandom.com/wiki/Ivar_Bloodfang?oldid=2838028"
Community content is available under CC-BY-SA unless otherwise noted.