The name, inspired by The Island of Doctor Moreau, is a reference to Alen Lapidis, a former Blizzard employee and environment designer during World of Warcraft's initial development. Lapidis had a penchant for consuming Diet Pepsi, for which "Tidesippe" is an anagram. Also named for Lapidis are (1) Lapidis Tankard of Tidesippe, and (2) Caretaker Alen.[citation needed]

The island existed during the WoW Alpha — however, it no longer exists in-game (beyond the appearance in the intro cinematic).

Island of Doctor Lapidis is one of the islands that were southwest of Stranglethorn Vale, the other being Gillijim's Isle. 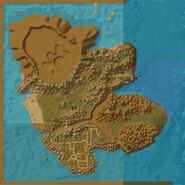 A camp on the Island of Doctor Lapidis from the Vanilla Alpha build.

A small village on the Island of Doctor Lapidis in the Alpha client.

In the World of Warcraft comic.
Add a image to this gallery

Retrieved from "https://wowwiki.fandom.com/wiki/Island_of_Doctor_Lapidis?oldid=2838035"
Community content is available under CC-BY-SA unless otherwise noted.