Ignis the Furnace Master is an optional boss encounter in Ulduar and can be found in the Colossal Forge. On orders from prime designate Loken, Ignis created both Kologarn and Razorscale.[1]

For every Iron Construct (even Molten ones) Ignis activates, he gains one stack of a 20% damage bonus. No more than a couple of these should be kept up at any time.

To kill an Iron Construct, it needs to be stood inside of a Scorch area until it gains 10 stacks of Scorch and becomes Molten. The construct tank can kite it through the scorches over and over, stand in Scorch with the construct and take additional damage, or have DPS keep it in Scorch using Entangling Roots, a pet, or Frost Nova. Once molten, it is stunned for a couple seconds, then drops all threat, has 100% faster move speed, and a powerful AoE fire aura that deals about 7,000 damage every six seconds. After the tank reestablishes threat, the molten construct needs to be dragged immediately to one of the water pools on the sides of the room so it turns Brittle. A brittle Iron Construct is a dark purple color and is stunned for 20 seconds, with a 50% increased chance to be critically hit. It will shatter if 5,000 or more damage is done in a single hit; only ranged DPS should be used to shatter it as an AOE explosion occurs, dealing 20,000 damage in a 10 yard radius. Shattering a construct removes one stack of Ignis' +20% damage buff. A brittle construct will revert to being a normal Iron Construct if not shattered within 20 seconds.

One strategy to deal with constructs dropping aggro when molten is to place the healers into the water so that constructs will head straight for them. This allows the tank to break away from a construct once it becomes Molten and be ready to pick up the next one. Healers must move at least 10 yards away from each construct before it is destroyed in order to avoid the AoE damage.

Shamans are particularly effective for blowing up the constructs since they can produce on-demand crits that deal the requisite 5,000 damage once every six seconds. Molten and Brittle Constructs are not immune to fire, so using a Flame Shock/Lava Burst combination on the Brittle Construct will reliably blow it up.

Death Knights can be very effective at tanking the adds. They can Dark Command or Death Grip when the adds spawn. They can then wait until topped off after a flame jet, pop anti-magic shell, and bring the add into the fire. At ~8 stacks they can cast chains of ice and begin running to the water. When the molten add becomes active they can dark command or death grip the add to the water, and then have a ranged attacker destroy it. Since the add becomes stunned they may also be able to shift to Blood Presence and destroy it themselves, in which case Anti-magic Shell & Icebound Fortitude is best saved for the explosion.

There should be multiple DPS assigned to destroy adds in the event Ignis puts one in the slag pot.

The Ignis encounter is an endurance fight with a soft enrage (not a timer) that makes up the complexity of the fight and affects all members of the raid.

For all modes, you will need a Main Tank to kite Ignis, and either an off-tank or a very skilled kiting DPS (probably two or even three on 25 man). If you attempt to turn the Iron Constructs molten and destroy them, you'll probably prefer an off-tank because of the mitigation and large buffer of health compared to a DPS. However, if you are going to simply DPS him down immediately (you will need to average about 3500 dps on 10 man for all 5-7 DPS), you can get away with a player who is able to aggro, dodge, and CC the constructs (prot warriors, prot paladin, mages, hunters with a pet, warlocks with a voidwalker, or a druid). Also, the constructs can be snared into place so any kind of druid is the best option.

As the main tank, have a hunter misdirect the boss to you, or simply run up and get aggro on him immediately. You should choose and make known which direction or area of the room you're going to kite him so the rest of the raid knows where to position themselves. Some groups choose to strafe him left to right (either across the room, or length wise near the constructs), around the entire room, or around one half of the room; note that he should never be tanked in front of the water if you are going to be destroying the constructs, as scorch will be dispelled. However, this is the optimal location for tanking him to reduce damage on the tank, and keep everyone in the same position throughout the fight.

The second way to tank him is to bring him to the direct center of the room. Have the tank turn him away from the raid and when he scorchs the ground, turn him to the left or right and keep the melee DPS where they are. Then, after then 2nd scorch run aross the boss and tank him in the opposite direction so the 3rd scorch goes to the right or left and the melee DPS can stay where they are. After the 3rd scorch comes, the 1st one should be down by now and you go back to the starting point. If done right, no one should take any damage from contrucsts blowing up nor should they lose Heat stacks. The off tanks should be ready to taunt them to water when they go molten and get out of the way of them blowing up.

Main Tanking - what to look out for

Naxxramas geared tanks (item levels 200 and 213) can take upwards of 25000-30000 damage per hit from Ignis' melee strikes. As the fight goes on, his melee strikes will gain an additional 20% damage from each Iron Construct that is active (eventually, if left unchecked, it will get to the point where you are one shotted). His scorch is a cone that will damage anyone he is facing, so your back should always be away from the raid. Flame Jets will throw you into the air briefly, but since you aren't a caster, your abilities should not become locked. After a scorch has landed on the ground around you, strafe out of it quickly to avoid taking damage and get your melee DPS into a safe spot as well. You should not aggro any constructs unless you wish to cause additional stress to your healers.

For the first 15 seconds of the fight, DPS Ignis. He doesn't have a cleave, and scorch won't be fired until 12 seconds into the fight (and you can stand behind him safely). When the first Construct appears, grab aggro and begin moving away from it. The more constructs that are up, the faster they move so eventually they will outrun you if you don't do anything about it. Off-tanks should only take about 1-2k damage per swing, so the damage they deal is negligible, however, since this affects your healers, if you can do something about it you should (as a prot warrior, you can charge constructs and then run past them, or intervene to a close ally to get away from enemies). If you're kiting them and you're not a tank, CCing abilities are vital to your group's survival. Frost Nova, Frost Traps and pet tanks, Void Walkers and destruction warlocks' AOE stun, and druid roots and travel form are all possible solutions, however they tend to only be effective for a few minutes. If your group is going to be destroying the Constructs, make sure you have a healer that can either heal you through scorch, or you have good CCers that can keep the constructs in the flames of scorch long enough to heat it up (moonkins and mages are very handy for that).

Healers need to be on the ball to keep the main tank healed because of the significant melee damage dealt by Ignis. Casters, particularly healers, should take care to stop casting before Ignis uses Flame Jets, otherwise they will be locked out of their spells for 8 seconds. All players should make sure to move out of Scorch areas. Random players will periodically be charged and placed in the Slag Pot attached to Ignis' stomach. Whichever player is charged should be healed through the DoT (they gain a debuff to help identify it on your raid frames). You should instruct your raid members to stack on you for AOE healing.

As a DPS, your job is to not stand in scorched areas, to call out when you are inside of the Slag Pot, and stand behind Ignis at all times (preferably stacked on your healers for AOE healing). Ranged DPS should be used to destroy Brittle Iron Constructs if your raid decides to kill the adds (only powerful abilities like Chaos Bolt, Frostfire Bolt, Fireball, Aimed Shot, and Starfire should be used to beat the 5000 minimum damage requirement). If you survive being stuck in the Slag Pot, you should use the haste buff as best you can (10 second duration) to fire off your slower, more powerful attacks. Since this fight is heavily reliant on DPS, every DPS member of the party should have a minimum of 3500 DPS (4000+ group average recommended) for the duration of the fight.

Ignis the Furnace Master does not have a hard mode.[3] 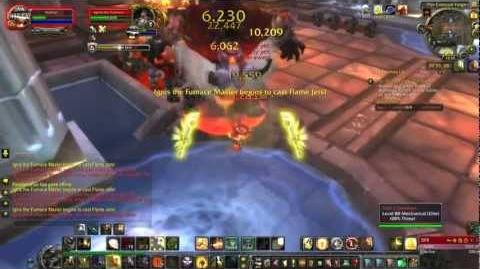 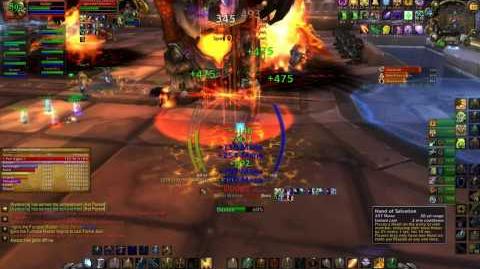 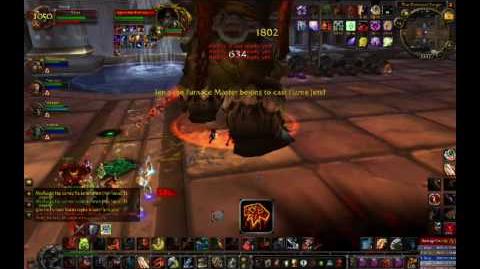 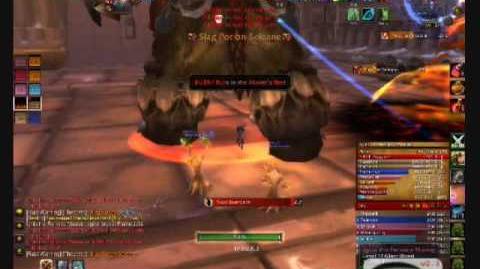 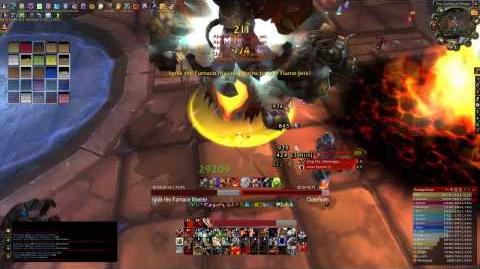 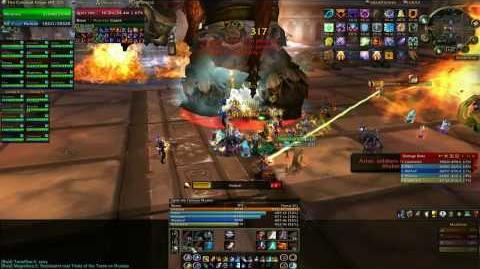 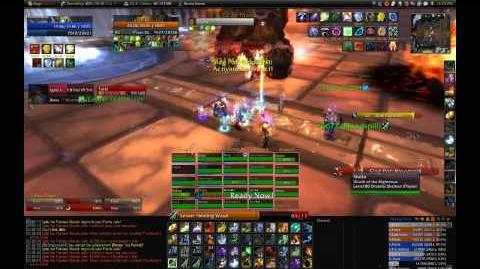 The name of this boss comes from the Latin word Ignis, meaning fire.

Some of the mechanics of the Ignis fight suggest that he is meant as a reference to the Greek god Hephaestus, god of the forge, blacksmithing, and fire. (Known as Vulcan to the Romans and Agni to the ancient Vedic peoples).

There is still an outstanding issue where the player in the Slag Pot receives melee damage. [4]

World of Raids Tactics for Ignis the Furnace Master based on PTR testing.
Retrieved from "https://wowwiki.fandom.com/wiki/Ignis_the_Furnace_Master?oldid=2634160"
Community content is available under CC-BY-SA unless otherwise noted.