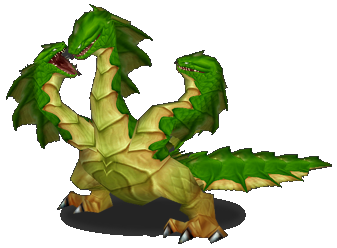 Hydras are three-headed amphibious beasts native to both Azeroth and Outland. Historians have long disagreed about whether the immense hydras of Azeroth and Outland share a common ancestor. What is clear, however, is that these ruthless creatures have existed on both realms since ancient times. Each head appears to display a level of independent behaviour. The forms of hydras vary somewhat between the two worlds.

Hydras are three-headed beasts that dwell in marshes and in damp underground areas. They are notoriously difficult to kill, both because their wounds heal quickly and, when another creature would die from similar wounds, they split into two smaller hydras. Some savage creatures discover ways to use hydras as guardians, though these creatures are by no means domesticated.[1] (MG 90)

They are found at the coasts of Darkshore, Ashenvale, Northern Barrens, Dustwallow Marsh, and Azshara. They are amphibious and each head has its own will. Some are intelligent and might be the favored pets or servants of the Old Gods.

Although hydras are usually uncategorized creatures, some hydras in Azshara were recategorized as beasts in Patch 2.0.1, possibly to ease hunter tracking during the hunter quest Wavethrashing. 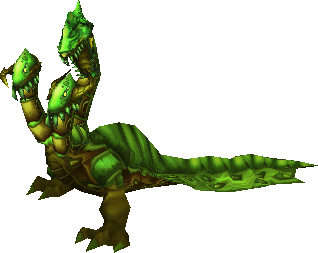 Another type of creature called a hydra can be found in Outland with a more segmented-like appearance. The outer two of their heads are small and have horns growing out the sides, several small eyes on each side, and no visible lower jaw. The middle head is larger and is notable for a single eye in the center of its face. They are commonly found in the pools of Zangarmarsh, such as the famous Ghaz'an, a boss in the Underbog.

In Netherstorm's Ethereal Eco-Domes, there is a single hydra called Markaru whose natural growth has been accelerated by the Ethereal technology. Aurine Moonblaze, an envoy of the Cenarion Expedition that was sent to investigate the technology, tasks you with retrieving its heart for study.

Though hunters can respec their pet hydras into Cunning or Tenacity, they are inherently Ferocity. In addition to the abilities that come standard with all pets ([Growl] and [Avoidance]) and those given to their natural or retrained specialization, all devilsaurs are given the following:

Retrieved from "https://wowwiki.fandom.com/wiki/Hydra?oldid=2821926"
Community content is available under CC-BY-SA unless otherwise noted.