Hunters pull and use threat redirection, crowd control, and primarily ranged damage. Some hunters have pets that add to their DPS which also allow special spells such as Rebirth and Heroism, and help manage aggro. They can also track, tame, and train animals and beasts found in the wild. The well-trained pet, on countless occasions, has saved a hunter's life. They are the only class that can name, feed, and 'train' their pets to have one of three specializations: Ferocity for burst DPS, Cunning for utility, and Tenacity for tanking. This specialization can be switched at any time when not in combat or dead.

Hunters excel in outdoor survival skills, such as tracking and laying traps. They wear mail armor. They are unable to use shields or plate armor. Beast Master and Marksmanship hunters start with a gun, crossbow, or bow, depending on their race. They can use all other weapons except wands, maces, and two-handed maces. Survival hunters specifically use melee weapons and start with a polearm.

Hunters use many abilities that either deal damage or apply a status effect that costs focus to use. Food and drink does not replenish focus; instead, the only source is by using certain abilities or by having it replenish naturally over time. Most other abilities are free to use such as Mend Pet or their Trap (Survival-only) abilities. They can take on various Animal Aspects that grant special abilities, such as improved run speed or additional ranged attack power.

Hunters are stalkers in the wild, living on their knowledge of survival and skill with a bow or rifle. They are deeply in tune with nature and some of its mightiest beasts are their allies. Of Azeroth's many creatures, few can resist the hunters' call, and fewer can survive their fury. Hunters are as varied as the world's many climates, but they are universally renowned for their amazing abilities to find their prey and bring it down. They come from any race (players are restricted to playable races, see below), though certain races naturally excel at the hunter's profession. Most hunters seek to aid the balance of nature along with their druidic allies.[1]

Hunters are skilled in stealth, slipping through the woods like a ghost. Orcs of the Horde first learned the ways of the hunter from forest trolls on Lordaeron and tauren have been masters of the hunt since the dawn of the world. Like the shaman, hunters call upon the spirits of the land, wind, and fire to aid them in their hunts and tasks. Their spells focus on the elements and the land.[2]

The hunter is one of the oldest classes in history. They represent a deep connection between man and beast, and the hunters of Warcraft are not merely individuals who track animals and slay them for food, but custodians of balance. They understand the natural circle of life and death and the part they must play in maintaining it, not simply as researchers, but as active participants. The "Hunt" is venerated, and the prey they choose to stalk is given as much respect as the predators hunters choose to learn from and embody.

All hunters create lifelong friendships with animal companions, who are also often their best and only friends, if the stereotype of the reclusive huntsman is to be believed. Hunters come in all shapes, forms, sizes, and specialties. Hunters are a curious mix of mysticism and rough wilderness know-how. They can learn to mystically align themselves with the aspects of various animals to assist them, such as the swiftness of a cheetah. Hunters use magically empowered traps to maim and snare their prey. They have various shots imbued with magic or explosives to slow, poison, handicap, and disorient their targets. They can even hold their breath and slow their heartbeat to a highly infrequent, inconsequential tap to give their pursuers the impression they are dead.

For Beast Mastery and Marksmanship hunters, ranged fighting requires a choice between a gun, bow, or a crossbow. When starting, this will depend on your race. Dwarves, worgen, and goblins are given guns; draenei, humans, pandaren and Forsaken start with crossbows; the other races get bows. However, all hunters can still use the ranged weapons that aren't inherent to their race. In general, crossbows are relatively slow, but hit harder and are favored for increasing burst damage, while guns are relatively fast and good for steady grinding. Bows have moderate attack speed and are favored for sustained DPS. Guns can be crafted by engineers, but there are no craftable bows or crossbows, so most ranged upgrades will come from mob drops and quest rewards.

Survival hunters forgo use of a ranged weapon, choosing instead to fight toe-to-toe in melee. All such hunters start with a polearm, regardless of race.

Pets are the most important tools in the hands of a hunter. They serve as aggro-management, additional DPS, and as tanks. The pet is essential to all specs, dealing anywhere from 10% of total damage for a Marksman and Survival, to 50% for a Beast Master. Formerly, pets had anemic damage potential and weak AI that often made them more of a danger to a raid than an asset. Improved AI - pets now always attack from the back of a monster - and an innate 90% damage avoidance has mitigated this concern.

Many beast-type mobs can be tamed, and each offer a set of unique active skills (there are special abilities just for wolves, just for cats, etc).

Hunters have a pet at level one. These pets are based on the user's race (night elves get a nightsaber, tauren get a plainstrider, goblins get a crab, etc.). They are able to control the pet through various commands at level 10. Hunters can have only one active pet at a time and 5 others out of the actual game accessible in the Call Pet UI. The stable can house up to 50 additional pets.

Note: This pertains to

Hunters have five different types of traps available for use. Some traps are a type of Crowd Control; others are a source of damage, although they do not scale well to the hunter's level. Traps exist for 30 seconds, have separate 30-second cooldown categories, and a 2-second arming timer once placed. A hunter can have one trap of each category placed at one time.

The hunter class can be chosen by any playable race:

*Only if the Disengage talent is chosen at level 45.

*Only if the Disengage talent is chosen at 45.

Note: Players technically start in Beast Mastery spec; if a player chooses another specialization at level 10, the following are removed: Cobra Shot and Concussive Shot (removed for Survival only).

The hunter (prestige class) was replaced with the hunter (core class) in the World of Warcraft RPG. [3]

A hunter's primary responsibility in nearly all raid encounters is to sustainably generate high DPS. They should know when to use Feign Death to get rid of aggro before they gain more aggro than the raid's primary tank and then continue dealing damage.

Hunters will almost never be asked to trap during raids, but might be asked during 5-man groups and heroics. Trapping is a form of Crowd Control. This is typically done by laying down a Freezing Trap before the pull, then using Distracting Shot to steal aggro after the tank pulls, thus making the mob run at and into the Freezing Trap. Hitting the mob with a Concussive Shot as it comes to the trap is a good way to buy cooldown time, making it easier to re-trap. The generally accepted raid symbol for this is a blue square, although it is very important to confirm this beforehand. The tank or off-tank will usually be responsible for taking aggro off of the hunter when the group is ready to deal with the mob. A skilled hunter of any spec should be able to keep at least one target controlled indefinitely.

It is possible to lay a trap before the pull, wait 30 seconds for the cooldown, trap a mob, and then move away a small distance and lay another trap. Whenever the first trap's effect wears off, the mob will usually run to the hunter and right into the other trap. This is called chain-trapping a mob.

In some cases a hunter will be asked to kite one or more creatures that either cannot or should not be killed during a specific encounter, allowing the rest of the raid to focus on other needs in order defeat the objective. Kiting is a skill that is best accomplished by hunters because of their Aspect of the Cheetah, pets, and armor rating; it requires a lot of practice. While kiting, the target is shot with instant and slowing abilities while the hunter uses speed boosts to stay ahead of it. Kiting for most hunters is the hardest skill to learn, yet is considered by many to be the most important.

Survival specialization returned to using melee-only weapons and also has a Harpoon ability akin to [Death Grip].[4] Survival are also the only hunters able to utilize traps, but an announcement at BlizzCon 2016 indicated this speciality would again be returned to the entire class. 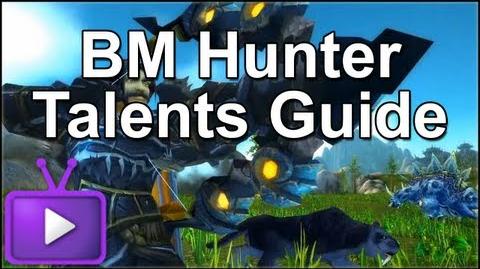 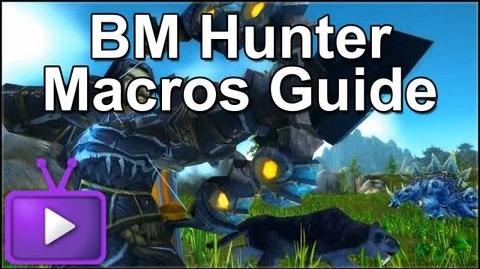 WoW Insider A closer look at the Hunter rare tames in Mists of Pandaria by Brian Wood Aug 1st 2012 at 7:00PM

Retrieved from "https://wowwiki.fandom.com/wiki/Hunter?oldid=2855459"
Community content is available under CC-BY-SA unless otherwise noted.