Horse mounts are largely Alliance only mounts. Horse mounts, in this case, includes those horses that are summoned from another plane (Felsteeds), and those that are embodiments of spirits (Paladin's Chargers, Death Knight's Deathchargers).

These trusty steeds have carried their human masters to battle since before the First War. Known for their swiftness and spirited temperaments, these mounts are perfectly suited for their heroic riders. The Evendales of Elwynn Forest are especially prized by adventurers for their loyalty and steadiness in the face of danger. Due to their overwhelming popularity, these horses can also be found in Theramore and even the Wetlands.[1]

These mounts give a 60% speed increase on land. You can purchase these mounts from several vendors:

You must have riding skill of 75 (obtainable at level 20). If you are playing as any race other than a human, you will also need to have Exalted reputation with Stormwind City. 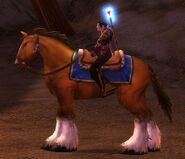 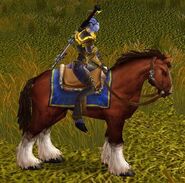 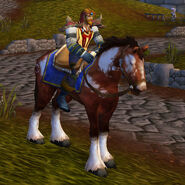 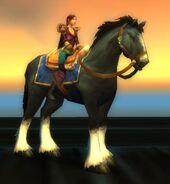 Black Stallion
Add a image to this gallery

Additionally, the Black Stallion mount is only purchasable through Unger Statforth in the Wetlands. Despite the many rumours and misconceptions about the mount, it has the same requirements as the other Apprentice level horse mounts. A very common misconception is that the mount is a new mount, when in fact this mount has been available as long as the other mounts. Note there is no riding trainer in Menethil Harbor

These mounts give a 100% speed increase on land. You can purchase these mounts from Katie Hunter, Merideth Carlson or Gregor MacVince, so long as your character has riding skill of 150 (obtainable at level 40). They are reputation restricted like the apprentice mounts. 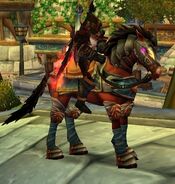 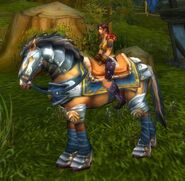 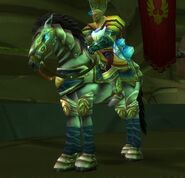 Swift White Steed
Add a image to this gallery

Death Knights, Paladins, and Warlocks are all able to gain mounts specific to their class (and for paladins, faction). 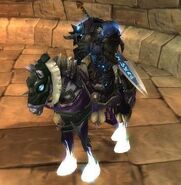 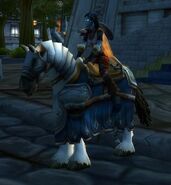 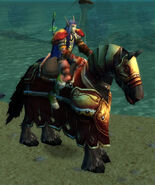 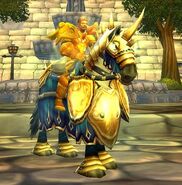 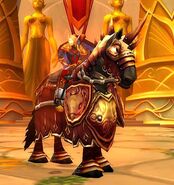 Thalassian Charger (Horde)
Add a image to this gallery

Paladins (of both factions) are able to acquire an Argent Charger through the Argent Tournament once they reach the rank of <Crusader>. 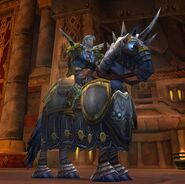 Argent Charger
Add a image to this gallery 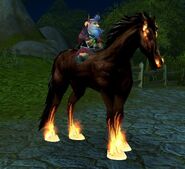 Dreadsteed
Add a image to this gallery

The Black War Steed is available from

Lieutenant Karter <Mount Merchant> in Stormwind for Honor points. You do not need to have exalted reputation with Stormwind City to purchase it. 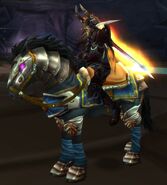 Black War Steed
Add a image to this gallery

This is a slight variant on an older mount.

A number of different horses can be purchased from the Argent Tournament, each with different requirements.

The human quartermaster to the Argent Tournament offers the Swift Gray Steed and the Stormwind Steed. You must have completed

Champion of Stormwind or be a human to gain access to this quartermaster.

The high elves offer a Quel'dorei Steed through their quartermaster to anyone who is exalted with The Silver Covenant. 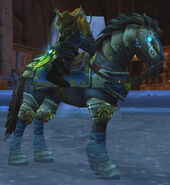 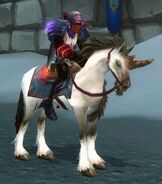 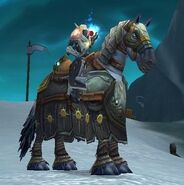 Argent Charger
Add a image to this gallery

A number of horse mounts are available as loot items from various places.

The Fiery Warhorse is looted from Attumen the Huntsman. The mount of the Headless Horseman can be taken from him during Hallow's End. 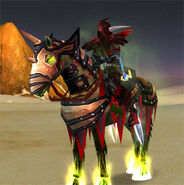 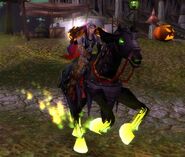 The Horseman's Reins
Add a image to this gallery 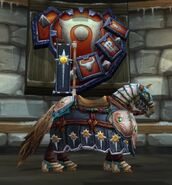 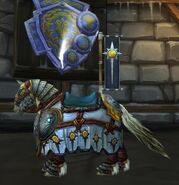 Crusader's White Warhorse
Add a image to this gallery

Defeating the Lich King on 25-player heroic mode has a rare chance to drop the [Invincible's Reins], the undead steed Invincible that belonged to Arthas Menethil in life and in death.[2] 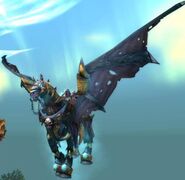 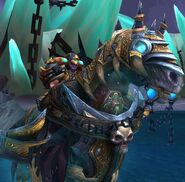 The Celestial Steed is a supernatural warhorse, the first mount directly purchasable from Blizzard, for $25US or €20/£17, and scales with the player's riding skill and location. 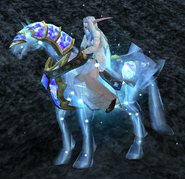 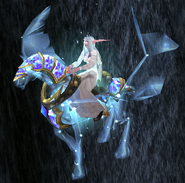 Celestial Steed in flight
Add a image to this gallery

Datamined in Patch 5.3,[3] apparently a reward for the achievement

Hearthstonedω τ ϖ, but how to get the achievement is not yet known:

These used the old horse mount graphics and as of Patch 1.4 are no longer obtainable. They can be exchanged for the newer variety if desired. 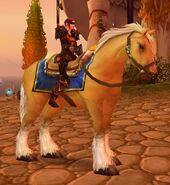 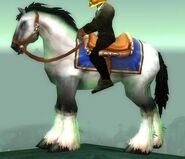 White Stallion
Add a image to this gallery

The Recruit-A-Friend program initially rewarded a player with a Swift Zhevra on successfully recruiting someone (who then paid for at least a month's subscription). This was subsequently replaced by the X-53 Touring Rocket. The program was updated in 2015 such that, once a friend paid for two months of game time, the recruiter would have a choice between four epic mounts, which includes the Zhevra and Rocket, as well as the Heart of the Nightwing and Emerald Hippogryph.[4]

Retrieved from "https://wowwiki.fandom.com/wiki/Horse_mounts?oldid=2836552"
Community content is available under CC-BY-SA unless otherwise noted.