Various around Westfall and Deadmines

Lieutenant Horatio Laine can be found in various locations around Westfall, including the Jansen Stead, Furlbrow's Pumpkin Farm, and Sentinel Hill during the Westfall storyline.

He can also be found just inside the Deadmines

, on the left side of the friendly area, where he starts the Deadmines storyline. 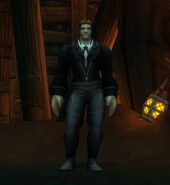 Horatio in the Deadmines
Add a image to this gallery

Retrieved from "https://wowwiki.fandom.com/wiki/Horatio_Laine?oldid=2851146"
Community content is available under CC-BY-SA unless otherwise noted.