Honor System 3.0 is the newest iteration of the honor system expected to be released with

World of Warcraft: Legion, marrying together aspects of the previous honor systems with additional concepts. The focus shifts away from PvP rewards, specifically gear, resulting in a vast power differential between players. In addition, the hope is that the improvements will allow PvP to not only be farther split from PvE, but able to be balanced entirely on its own, as the perks will not be usable anywhere but PvP areas.

As players dominate the enemy faction, they’ll unlock PvP-specific spells and abilities that open up a range of new tactical possibilities, and earn prestigious new titles and rewards.

The new feature uses a talent system that depends upon honor and honor ranks.

Honor talents will be not only class specific, but also specialization specific.[1] 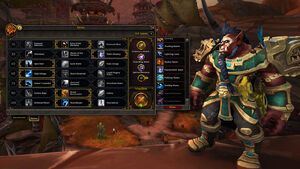 With Battle for Azeroth, Blizzard is streamlining the system so that PvP talents will become available as players level, keeping players on more even footing. Players will be able to select any three PvP talents from a large pool of options, along with a special crowd-control-breaking talent (variations on the old “PvP trinket”).

Players earn this crowd-control breaker at level 20, choosing from one of three available options via a fly-out menu. By level 110, all PvP talent options will be available to choose within the Talent pane (N). This system offers more options for customizing characters to suit play styles or environments, whether that’s world PvP, Battlegrounds, Arenas, or the new Dueler’s Guild. As with class talents, players will need to be in a rested area to switch between these.[2]

"Marks of Honor" are returning (

[Mark of Honor]) as a general PvP item currency, but will be limited compared to the more general honor points and be intended for purchasing PvP gear from the previous expansion. 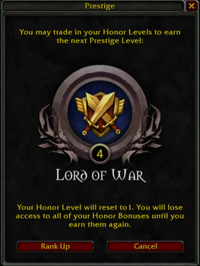 If players elect after reaching Honor Level 50, they can reset their Honor Level and go through the system again to increase their Prestige Level.

Artifact skins
Add a image to this gallery

WowJuju Everything we know about Legion’s PvP Honor System by Luci at August 12, 2015

BlizzardWatch Legion brings a new honor system for PvP by Matthew Rossi on August 6, 2015 at 12:53pm
Retrieved from "https://wowwiki.fandom.com/wiki/Honor_System_3.0?oldid=2847743"
Community content is available under CC-BY-SA unless otherwise noted.