The zone Hillsbrad Foothills, or simply 'Hillsbrad', contains quests mostly suited for Horde characters around the level of 20. Located in the southern end of the north island of (Eastern Kingdoms), the hills are home to the towns of Southshore and Hillsbrad (Alliance towns before the Cataclysm), and Tarren Mill (Horde). Some notable locations, such as Durnholde Keep and Azurelode Mine are also found here. Since Hillside lies outside of Thoradin's Wall, it was a crossroads between Alliance and Horde players, which made combat between the two factions likely.

Before the Cataclysm, Hillsbrad was relatively safe and stable. Its hills were green and pastoral, its meadows fertile and its soil rich. Humans loyal to the Alliance controlled Hillsbrad from the town of Southshore, though the Syndicate, murlocs and Forsaken threatened their serenity.[1] The Cataclysm upset this balance, however, as the Horde and Forsaken successfully pushed their way into the borders, destroying virtually everything the Alliance once held and chasing the refugees to Fenris Isle. The entirety of the region is now under Horde control, and those loyal to the Alliance would be foolish to set foot inside their borders.

Hillsbrad is traditionally the most blood soaked battlefield on Azeroth, despite its pleasant, pastoral setting. In the Second War, it saw several important skirmishes between orcs and forest trolls on one side, and humans and high elves on the other. In the Third War, the Scourge wiped out the human town of Tarren Mill, though later it was claimed as the southernmost holding of the Forsaken. Since then, the undead have been battling fiercely with the humans of Southshore, and the region is infamous for having at one point been impossible to even enter without being slowed down by the constant battle and bloodshed. It was formerly the home of Dalaran before the Third War.

An instance inside the Caverns of Time in Tanaris sends players back seven years in the past to a location known as Old Hillsbrad Foothills as part of the Escape from Durnholde Keep quest. The instance duplicates most of the current setting of the zone with the exception of Tarren Mill (at that time still untouched by the Scourge) as well as Durnholde Keep still on its defenses. Some soon-to-be notable characters can also be met in Southshore, such as Sally Whitemane, Captain Sanders and Kel'Thuzad.

The Forsaken gained the upper hand during the events of the Cataclysm, due in no small part to the use of the Forsaken plague, despite being expressly forbidden by Garrosh Hellscream. Hillsbrad Fields shows the most terrible result of this plague, now named the Sludge Fields and overridden with mindless aberrations. Southshore, once the most prominent Alliance holding, now lies in complete and utter ruin, most of the inhabitants slain or engulfed by monstrosities birthed by the plague. Plague tanks still line the road, now flush with green, sickly pools.

The Horde did not stop with pushing out the Alliance, though they certainly claimed much territory from their most hated enemies, including Azurelode Mine and the Lordamere Internment Camp. The Syndicate also were routed or killed, giving up Eastpoint Tower and Durnholde Keep, the Keep now used as a proving ground for would-be Horde heroes. In addition to their new territories, the Horde have updated their architecture to reflect a Forsaken feel, including their well-known town of Tarren Mill.

The Alliance have not completely given up without a fight. Corrahn's Dagger, the Headland, and Gavin's Naze all contain Stormpike troops which Horde adventurers must deal with, and SI:7 assassins now stalk Sofera's Naze. The Stormpike have even attempted to claim Purgation Isle with the help of the worgen. Even the spirit of the dwarves live on at Dun Garok, fighting for their lands after death. This reminds the Forsaken of their own tumultuous history and earns their respect. Because of this they report Dun Garok to be uninhabitable so that the spirits can keep what they fight for.

Though the rest of Lordaeron was ravaged by the Scourge and twisted into a haunted perversion of its former self, the Hillsbrad Foothills largely managed to escape this fate until the Cataclysm.. It remained the best preserved region of the fallen kingdom, giving travelers a feeling for what the land was like before the Plague. It was Human country, soft and green.

Pine trees dot the ample farmland, and the rolling pastures frequently crisscross with roads leading to the numerous towns and villages that remain. A river flowing from Darrowmere Lake in the Western Plaguelands runs north to south. There are a few small, empty islands off the southern coast, and one larger one, Purgation Isle.

Since the merging of Alterac Mountains with Hillsbrad, the Alterac Valley battleground is situated in this zone now, and can be found in its usual location in the mountains, just below the snowline. The Horde entrance lies close to Tarren Mill, while the Alliance entrance is located nearer the Ruins of Alterac, due north of the Ruins of Southshore. In addition, the micro dungeon Purgation Isle can be found here.

Alliance
Should players desire to travel into Horde-controlled territory, start from Ironforge in Dun Morogh, run east on the road all the way to the Loch Modan Zone. Then, continue running north, until you reach the Wetlands. Run east in the Wetlands until you encounter a road running north. Run north, over the bridge, until you meet a road running west. Take that road, pass under the great wall, and you will be in Hillsbrad. Don't forget to pick up the Thelsamar, Menethil Harbor, and Refuge Point flight paths on the way!
Alternatively, Alliance can swim up the coast from Menethil Harbor, avoiding underwater mobs. This route is perhaps safer and slightly faster, but far less scenic. It also forces you to walk to Refuge point later, since you can't pick up the flight path.

Horde
From The Sepulcher in Silverpine Forest, run east to the main road, then follow it all the way south. Keep following it as it curves east all the way into Hillsbrad. Be certain to pick up the flight path at Southpoint Gate. Continue to follow the road through until you see a signposted turn off to the north to Tarren Mill. You should also pick up the flight point at the Ruins of Southshore to the south prior to turning for Tarren Mill. Once at Tarren Mill, the flight path is near the entrance to the town.

Hillsbrad Foothills was home to several Alliance characters of note. At Southshore, Magistrate Henry Maleb sought aid in the battle against the Syndicate, and Marshal Redpath sent promising adventurers into the Alterac Mountains to slay the vicious ogres that had their holdings there. In Tarren Mill, Apothecary Lydon attempted to concoct the perfect new plague, and High Executor Darthalia ordered agents of the Horde into human lands to show them what's what. 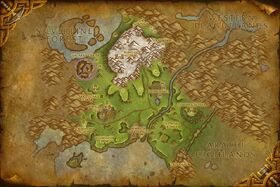 Map of Hillsbrad Foothills, post-Cataclysm (Current)
Add a image to this gallery

"If there is one great truth about Hillsbrad, it's that this region is destined to live under the shadow of war." ~Huraan, Southshore NPC

On PvP servers, and less commonly, non-PvP servers, Hillsbrad was Ground Zero. It was arguably the single most actively contested region within the game, with the area immediately surrounding Tarren Mill often being a major battlefield. This was due to a meeting point between the Forsaken players reaching level 20-25 (coming from Silverpine Forest) and level 30 Ironforge Dwarf players (coming from Wetlands through Arathi Highlands). It was suggested that the zone should probably be avoided for solo questing (or by levels below 20), especially considering that some max level players of the opposing faction who visited customarily had no qualms about killing characters much lower in level than themselves. Although quests were available here, the area tended to be frequented by individuals whose primary interest was PvP combat (on PvP servers).

Having been previously known as "Gankbrad","Pwnshore", and Killsbrad Foothills among others, Hillsbrad was the place for PvP action before Battlegrounds were introduced. This brought some peace to the area, but sometimes Alliance or Horde would still venture to the opposing faction's outpost in parties or raids to wreak havoc, especially when the battlegrounds were down.

The town of Hillsbrad
Add a image to this gallery

Azurelode Mine taken by the Horde

The Ruins of Southshore
Add a image to this gallery 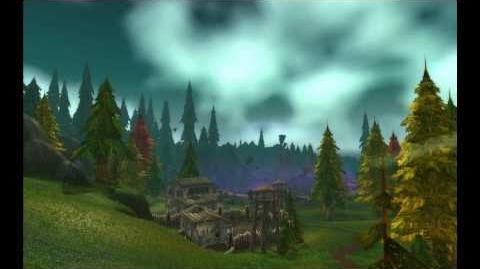 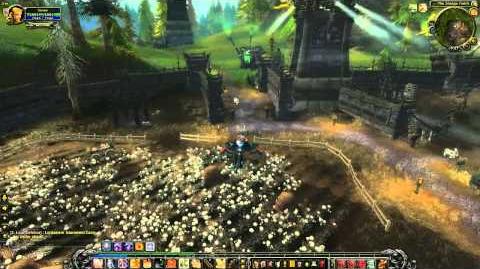 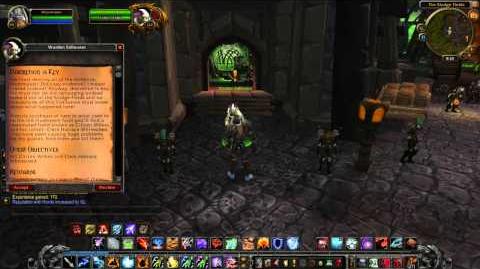 Cataclysm - Hillsbrad Alterac Overview
Add a image to this gallery

Retrieved from "https://wowwiki.fandom.com/wiki/Hillsbrad_Foothills?oldid=2840527"
Community content is available under CC-BY-SA unless otherwise noted.