Hermit Ortell is a level 58 quest giver located at Ortell's Hideout [66, 70] in the contested territory of Silithus. He also serves as a quest giver within Mount Hyjal near Darkwhisper Pass[71, 58] as Elementalist Ortell.

Hermit Ortell was once member of the Twilight's Hammer cult, but has recently deserted the sect. However, the Twilight's Hammer are not kind to those that leave their ranks, and since Ortell's retirement, they have attempted to hunt him down, but he fooled them so they believe he's in a cave system in Westfall. Needless to say, an enemy of theirs is a friend of his.

Note: An exact copy of this cave exists at the coordinates [87, 43] in Dun Morogh. When you enter, you join Silithus general chat.

Having completed all of his quests, adventurers may choose to hand in

A few hours after the turn-in, Ortell will send you a

Hermit Ortell, now wearing proper clothes, appears in Mount Hyjal as Elementalist Ortell. He stands next to the air elemental Aeolos. He is also hiding within an outhouse at the Forge of Supplication and offers quests from there (see Outhouse Hideout). 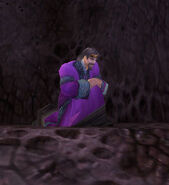 Ortell in Mount Hyjal.
Add a image to this gallery

Retrieved from "https://wowwiki.fandom.com/wiki/Hermit_Ortell?oldid=2760506"
Community content is available under CC-BY-SA unless otherwise noted.