Hellfire Ramparts (often known as just "Ramps" or "The Ramparts") make up the first wing of the Hellfire Citadel instance in Hellfire Peninsula, Outland. The citadel itself sits in the center of the zone, in the middle of a broken-up wall that divided the zone before the conflict began. The Ramparts takes place atop this wall along the sides of the citadel. This is the first instance available to players of the Burning Crusade, and can be completed wearing dungeon set items. It gives rewards that are on par with Molten Core gear (or even slightly better).

This instance has three boss encounters and four bosses. The first boss is Watchkeeper Gargolmar. Up the tower beyond him, the path splits. The right path leads to Omor the Unscarred (which is usually killed second), the left leads to Vazruden and Nazan, which is the most difficult encounter in this instance. After killing the dragon and its rider a Reinforced Fel Iron Chest appear. Curiously, despite most people and even various in-game sources placing Vazruden as the final boss, Omor is the only required kill for the non-Heroic achievement

A level 57 can enter the instance, however, they must be summoned via Meeting Stone or a Warlock's Ritual of Summoning, as they cannot enter Outland using the Dark Portal.

In order to enter the instance in heroic mode, all party members must buy the key from the quartermaster in Thrallmar / Honor Hold, which requires honored reputation with Thrallmar or Honor Hold respectively.

Killing monsters in this instance grants Thrallmar and Honor Hold reputation. Each normal orc grants 5 reputation, each wolf grants 2.5, and each boss grants 50. Vazruden and Nazan count as separate bosses for this calculation. Reputation stops at honored, bosses included.

A normal Ramparts run will yield around 575 reputation. 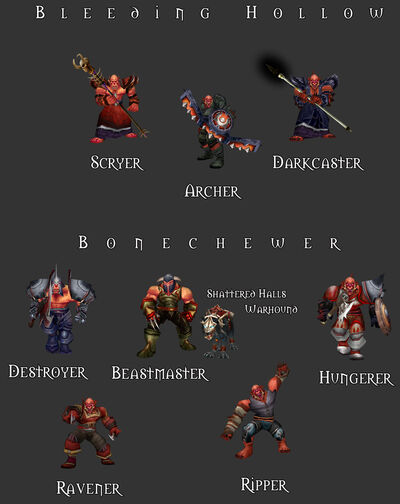 The Beastmasters are immune to Sheep and traps.

While the Warhounds aren't listed as elites, they can still tear apart most cloth armor wearing class. If they slip past your main tank, they will eat your healers alive. For this reason, tanking them is recommended. They can be crowd controlled (Hibernate, Sheep, and Trap).

Largely unchanged. It's still possible to use traps or fear on the adds (but not seduce), and he himself does not hit particularly hard. The adds melee for around 600 to cloth, so they can easily be tanked by pets while being burnt. His charge does roughly 900 to cloth, so it is once again largely ignorable. His main change is the stacking of a 10% healing debuff on the main tank, which makes this something of a DPS race.

This fight is considerably more difficult as the Aura debuff he applies does ten times more damage, killing anyone near the afflicted within seconds, so good spacing is necessary. The debuff is not dispellable, but Rogues may escape the spell by using Cloak of Shadows. His Fiendish Hounds are much more powerful, doing 3000 to cloth melee and possessing a 3000 point mana burn. They are still vulnerable to enslave, banish and fear, and do roughly 1000 a hit to Omor himself when enslaved.

Omor drops a Primal Nether as well as a Badge of Justice.

This fight follows the same basic principles as the non-heroic, but is much harder. Nazan drops fireballs from the air during the initial fight, which hit for around 2000–3000, but the tick from them is easily 4500 fire damage, so move immediately when hit. Nazan also gains a Bellowing Roar which fears the entire party.

Hitting Nazan with DoTs or other ranged damage before he descends will cause him to use his fear while still airborne.

If the group wipes after killing Vazruden and then restarts the fight, 250 reputation are gained for each Vazruden kill. It appears the fight bugs and does not respawn correctly if people leave the instance by running away during the fight.

Retrieved from "https://wowwiki.fandom.com/wiki/Hellfire_Ramparts?oldid=2827187"
Community content is available under CC-BY-SA unless otherwise noted.