Were you looking for the in-game item,

[Hearthstone] or the Hearthstone: Heroes of Warcraft wiki?

"Sheathe your sword, draw your deck, and get ready for Hearthstone - the fast paced strategy card game that's easy to learn and massively fun. Start a free game on Battle.net and play your cards to sling spells, summon creatures, and command the heroes of Warcraft in duels of epic strategy.

"With powerful prebuilt decks, and hundreds of additional cards to win, craft or purchase - your collection never stops evolving.

"Challenge players of all skill levels on Battle.net or hone your skills in practice matches against some of the greatest strategists of Azeroth - Thrall, Uther, Gul'dan, and more!

Hearthstone: Heroes of Warcraft is a free-to-play digital strategy card game that anyone can enjoy produced by Blizzard Entertainment and unveiled at PAX East in March 2013. Players choose one of nine epic Warcraft heroes to play as, and then take turns playing cards from their customizable decks to cast potent spells, use heroic weapons or abilities, or summon powerful characters to crush their opponent. Players can play against the AI, random players, or their friends.

Hearthstone was initially available for Windows and Macintosh, and was later brought to tablets and smartphones.

A player can be represented by a variety of Heroes, each having a unique Hero Power. Vanity heroes can also be acquired by various means that appear slightly animated on their hero plate during a match and provide additional cosmetic effects.

Each hero is an archetype of one of the 9 basic World of Warcraft classes: Druid, Hunter, Mage, Paladin, Priest, Rogue, Shaman, Warlock, and Warrior.

So far Death knights, Demon hunters and Monks are not part of the game as player usable heroes.

The basic hero power costs 2 mana and varies with the associated class of the hero.

Once you’ve selected which hero (class) you want to play as, there are three types of cards you can build your deck with in Hearthstone: spells (abilities or hero powers), weapons, and minions. Each card falls into either the "basic" or "expert" card set.

Both basic and expert cards have important roles to play in all decks, regardless of whether you're just starting out or are a Hearthstone grandmaster.

So far there only 3 subtypes for cards:[2] 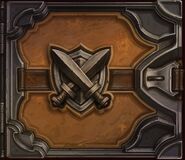 Card manager art
Add a image to this gallery

These are attributes appearing on cards.

To date there are over 300 cards; this is a small sampling.

Valeera Sanguinar (Rogue)
Add a image to this gallery

Arcane Missiles
Add a image to this gallery 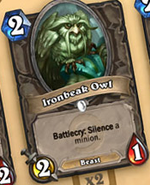 Mana Addict
Add a image to this gallery 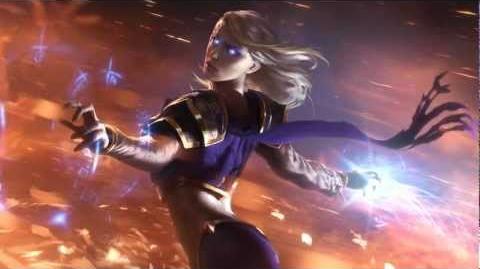 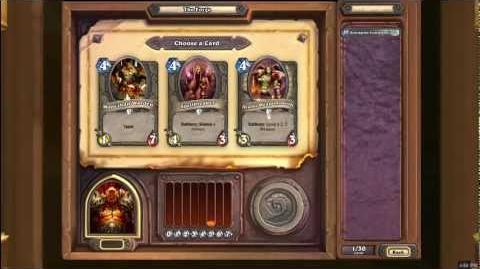 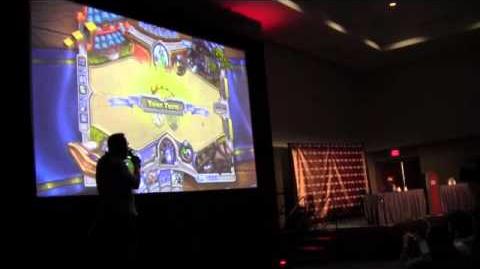 From BlizzPlanetGaming
Add a image to this gallery

WoW Insider What we love and what we hate about the Hearthstone beta by Elizabeth Harper Aug 21st 2013 5:00PM

Retrieved from "https://wowwiki.fandom.com/wiki/Hearthstone:_Heroes_of_Warcraft?oldid=2837935"
Community content is available under CC-BY-SA unless otherwise noted.