Were you looking for the artifact to be introduced with

Battle for Azeroth also called the 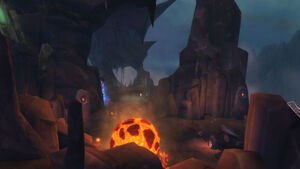 The Heart of Azeroth is a cave system atop Storm's Eye Overlook, a shelf that extends over the Maelstrom. It is the order hall for the shaman class. The remnants of the Earthen Ring are arriving here, retreating from disastrous battles with the Burning Legion all over Azeroth, including the Twilight Highlands. Not much of the order remains, but the hope is that the elements will aid them here, at the core of the world, in their hour of greatest need.

Shortly upon arriving, the Overlook is besieged by infernals, under the direction of their felguard commander. Thrall, taking up the Doomhammer, is unable to defeat him, as the artifact no longer responds to his call. He surmises this is because of his battle with Garrosh Hellscream and his decision to kill the former Warchief. When all seems lost, the Earthen Ring manages to trigger an ancient weapon, channeled through the body of the hero and into the demon. The felguard does not die, though he plummets into the Maelstrom.

Like other order halls, The Heart of Azeroth has an artifact weapon forge, a command map to send out followers, a portal to Dalaran, and a book to record players' deeds. The area is currently under construction, so it remains to be seen what vendors will be available. Paths are lit by the gentle glow from shaman totems.

Shaman access the Overlook and eventually The Heart of Azeroth as part of the introductory Artifact Weapon questline. Upon obtaining their artifact and returning to the Overlook, they summon the power of the elements to wrench open the cavern leading to the Heart.

Access is available via the portal on Krasus' Landing, to the right of the flight master as you are looking at him, by the entrance to

View to cave while dead

Maelstrom bottom while dead
Add a image to this gallery

Retrieved from "https://wowwiki.fandom.com/wiki/Heart_of_Azeroth_(Order_Hall)?oldid=2835618"
Community content is available under CC-BY-SA unless otherwise noted.