For the creature who attacks the villages, see Shade of the Horseman.

During Hallow's End, the Headless Horseman is a summoned elite boss spawned in the Pumpkin Shrine in the middle of the Forlorn Cloister in The Graveyard, a special seasonal instance of the Scarlet Monastery. Additionally, his shade attacks Horde and Alliance villages at various times throughout the event.

The Horseman was once a knight of the Silver Hand, but is now cursed. He is of the belief that he is alive, while those who face him are dead. When defeated, he is revealed as Thomas Thomson (aka Sir Thomas).

After using the Dungeon Finder and entering the graveyard, click on the Pumpkin Shrine to summon him. Each character can summon the horseman once per day.

Mists of Pandaria, players need to be a minimum of level 89,[citation needed] which is a break from tradition, to queue for the dungeon. Usually characters of many levels can participate, with some looking forward to doing this each year on lower level characters to decorate them and get unique items. The Headless Horseman can no longer be reached without using Dungeon Finder as he appears in a special instance separate from the regular versions of the Scarlet Monastery instances.

This section needs to be cleaned up to a higher standard of quality. Reason: Needs update for 2013. Current phases are just guesses.

The Headless Horseman encounter is a three phase fight.

The Horseman makes his entrance and engages whoever lit the candle. The tank should taunt immediately if they did not start the event. Watch out for Cleave and DPS him down.

At 1% the horseman will go immune, toss his head, walk around disoriented, and occasionally use a Whirlwind attack. The Head of the Horseman will become an active target while the body heals to 100%. All DPS should have a target macro for Head of the Horseman. After the party damages the head to about 60%, or the body heals to 100%, the head will rejoin the body and the next phase begins.

When the Horseman rejoins with his head, he targets the player with the highest threat. This is the same as phase one except he will randomly cast Conflagration on a random party member (not the tank). You can use a PvP Trinket to remove the Conflagration. Healers and ranged DPS should be alert to the location of both tank and Conflagration target; steer clear of these.

Phase two ends if the head reaches about 30% health, or when the body heals to 100%.

The Horseman does not use Conflagration in Phase Three. Eventually he will toss four Pulsing Pumpkins, which sprout Pumpkin Fiends after several seconds, and they will completely heal. The pumpkins have around 10k health and the Fiends will crit cloth wearers for 1k. The fastest course of action seems to be having the tank stand in the middle of the pumpkins with focus abilities at the ready. The rest of the party continues DPS on the Horseman until his head is tossed. If the party has low DPS, a second or even third wave of Pulsing Pumpkins can be spawned before the head is tossed.

Tanking the Horseman on the steps to the underground area will cause all the spawns to land very close to the boss. This should make it very easy for the tank to pick them all up.

Horseman Death
This end have I reached before. What new adventure lies in store?

Player Death
Your body lies beaten, battered and broken. Let my curse be your own, fate has spoken.

In addition, everyone in the party gets 5

[Tricky Treats] after every kill. You will also receive a [Loot-Filled Pumpkin] the first time you kill him each day.

For historical purposes, these items were only available prior to

For historical purposes, these items were only available during the 2007 and 2008 events. 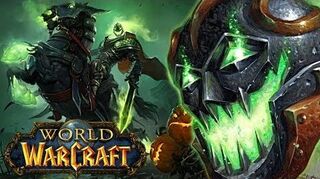 Retrieved from "https://wowwiki.fandom.com/wiki/Headless_Horseman?oldid=2852357"
Community content is available under CC-BY-SA unless otherwise noted.