Harkor is a dwarf that can be found in multiple locations of the game, including Zul'Aman, Grizzly Hills, Tanaris, and Uldum.

Harkor can be found in the cage of Akil'zon, the Eagle boss in Zul'Aman. Once freed, he will whack the box next to his cage, giving gold and a chest. The loot in the chest depends on the order you kill the bosses in. More info on the timed event can be found at the Zul'Aman timed event page.

Conversation with Harkor after he is rescued:

Ya be havin' me gratitude, <class>. If there be anythin' I can be doin' fer yeh, just say so.

A sad tale, that one - a wee bit embarrassin' too.

My people be know fer havin' a taste fer the ale, ya know. And I be no exception. Seems I been given more than me share of the thirst.

So I run inta ol' Budd ya see, an' he offers me all the grog I can swallow fer joinin' his crew - a move I've come to regret.

One night, after drinkin' enough grog to drop a Kodo, I was lured into followin' Budd's band o' misfits into Zul'Aman.

That be the last I recall before findin' meself in that cage.

Sometime later after being rescued, Harkor moved from Zul'Aman to Harkor's Camp[73.8, 34.0] in the northeastern area of Grizzly Hills, where he seeks revenge on the local trolls for his imprisonment in Zul'Aman. Fellow Zul'Aman prisoner Kraz can also be found at the camp.

Harkor is part of the caravan that travels from Thistleshrub Valley[30.4, 65.6] in Tanaris to Uldum, searching for treasure. The caravan is attacked by pygmies and all members captured, but they later escape as part of the introductory quests to the zone. Harkor continues on with most of the other escapees and finds his way to Mar'at[50, 40], a Ramkahen village. He stands near Tabat, perhaps wishing for beer rather than the water the vendor sells.

Harkor on his way to Uldum. 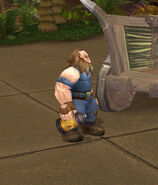 Retrieved from "https://wowwiki.fandom.com/wiki/Harkor?oldid=2586150"
Community content is available under CC-BY-SA unless otherwise noted.