For the greater complex of which this dungeon is a part, see Frozen Halls.
For the achievement, see The Halls of Reflection.

The Halls of Reflection is the third and last wing of the Frozen Halls instances of Icecrown Citadel, released in patch 3.3 It is considered the hardest 5man instance due to the difficulty and loot. The Halls of Reflection are the private chambers of the Lich King, the only place where he lets his guard down. Judging by the loading screen and map, it appears to be a dark, twisted replica of Lordaeron's imperial chamber.

To become attuned and unlock the doors to the Halls of Reflection, players are required to complete the quest Deliverance from the Pit (Alliance) / (Horde) in the Pit of Saron as part of the Frozen Halls story line quest chain. Pit of Saron has its own "attunement" prerequisite quest that must be completed in the Forge of Souls.

The dungeon finder has a minimum required gear score that must be satisfied before you can be queued for the instance. However, any level 80 player may enter directly through the portal.

With Jaina and Sylvanas leading the way, adventurers who make it as far as these frigid halls will quickly recognize the weapon that lies ahead: Frostmourne, the corruptive, legendary device and weapon of the Lich King himself. The Lich King's private chambers are within reach, although they may be the death of anyone who ventures there.

Falric and Marwyn
Captains for Arthas Menethil in life, Scourge commanders for the Lich King in death, Falric and Marwyn will be summoned to the Halls of Reflection for one purpose: destroying all intruders.

The Lich King
Sylvanas, thirsty for vengeance against the corrupted prince who sentenced her to an existence as an undead monstrosity, and Jaina, eager to find a flicker of Arthas's soul locked somewhere within the Lich King, have brought their hand-picked allies to this final confrontation. Arthas's true power may only now be discovered. Is there any hope in this mission, or does only death await?

The "fight" against him is more of a damage race, in which players must escape lest they be struck down by the wrath of the Lich King (literally).

Halls of Reflection is the hardest heroic 5-man in the game. Most groups will find the most challenging part to be the waves of trash before the first two bosses. The mobs hit very, very hard, and several of them are ranged, making them difficult for tanks to corral.

Before each wave of trash before Falric and Marwyn, everyone except the tank hides in the corner of the left alcove, out of the line of site of all mobs. The four players (healer and 3 DPS) stand on top of each other. The tank stands in the middle of the alcove in plain view.

When the mobs activate, the tank allows the melee mobs to reach him, and uses abilities (e.g., Thunder Clap) to aggro them. The ranged mobs may aggro on the tank immediately, or, having aggrod on a hidden party member, will have to run past the tank to reach their targets. In the latter case, the tank's close-range aggro abilities can be used to take aggro. In this way all of the mobs in the wave will be aggro'd onto the tank.

The other approach fights in the open. Players must dust off long-neglected crowd control abilities. Shackle Undead, Entangling Roots, Repentance, Turn Evil, Frost Trap are all very useful. Silencing casters and using Misdirection or Tricks of the Trade on melee mobs will help the tank hold aggro. Everyone who can interrupt spells should do so. Mindlessly maximizing DPS will lead to wipes - intelligently controlling the mobs will lead to victory.

Map of the Halls of Reflection.

Chamber of the Frostsworn General.

Frostmourne hovering above its altar.

Orgrim's Hammer arrives.
Add a image to this gallery 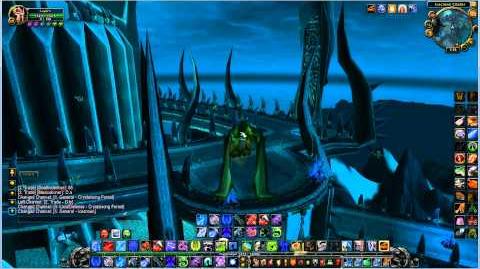 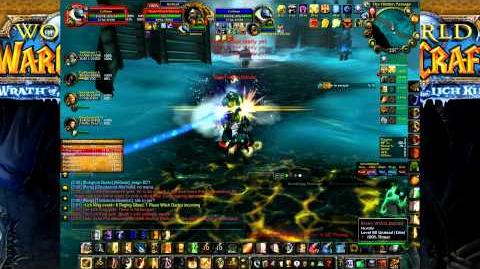 All Heroic Bosses: Paladin Tanking Perspective -HD1080p.
Add a image to this gallery

Retrieved from "https://wowwiki.fandom.com/wiki/Halls_of_Reflection?oldid=2844108"
Community content is available under CC-BY-SA unless otherwise noted.