This item is a quest reward from the following quests:

Pumpkin Treats are sold in stacks of 5 from the following vendors once you complete the Hallow's End Treats for Jesper!/Spoops! quest:

The 4 possible forms when you eat this also have effects other than appearance:

If you receive the Great Pumpkin effect while another effect is active, you will receive both benefits and looks at the same time. This is only confirmed for the Pirate effect currently. 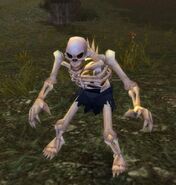 Normal skeleton
Add a image to this gallery

Retrieved from "https://wowwiki.fandom.com/wiki/Hallow%27s_End_Pumpkin_Treat?oldid=2388761"
Community content is available under CC-BY-SA unless otherwise noted.