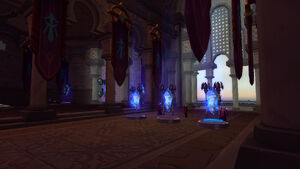 The Hall of the Guardians is the order hall for the mage class. It serves as a base of operations for like-minded magi from both factions to reform the Tirisgarde after artifacts were stolen by the Burning Legion. The tower is located within the city of Dalaran.

Access is only granted to magi who have completed their artifact weapon quest and subsequent follow-ups. After, it can only be accessed via the teleport spell given to the class. At present, there appears to be no way - on foot or flight - to access it otherwise.

Retrieved from "https://wowwiki.fandom.com/wiki/Hall_of_the_Guardian?oldid=2809895"
Community content is available under CC-BY-SA unless otherwise noted.