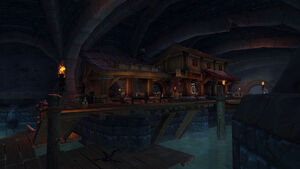 The Hall of Shadows is the order hall for the rogue class. It is found within the

Dalaran, right under the nose of Khadgar. Though technically a part of the Underbelly, it is not connected to the parts other classes can get to.

The Hall of Shadows is made up of multiple parts; First is the stairs from Glorious Goods which leads to the Cloaked Vestibule. From there, the majority of vendors in this class hall can be found along the northern stone gangway before coming to the bridge which leads southwest to the old Cantrips and Crows Tavern. Next, to the northwest of the Tavern, past the Tunnel of Woe, is the Den of Thieves training area where, judging from the skeletons littering the floor, fights to the death take place. Then, continuing southwest through the Tavern, the Uncrowned Vault can be found. This houses the [Crucible of the Uncrowned], used for the empowering or altering the appearance of your Artifact Weapon. Finally, also through the Tavern and a little more south than the Vault, hidden behind a bookcase and down a set of stairs, is the Chamber of Shadows, which is accessed via turning a torch on the wall.

Members of the Uncrowned include the Bloodsail Buccaneers, SI:7 of the Alliance, Defias thieves, Ravenholdt Assassins, Black Market Auction House dealers, the Shattered Hand of the Horde, the Deathstalkers of the Forsaken, and all manner of bandit, cut-purse, pirate, or shady mercenary on Azeroth.

There are four ways for Rogues to enter the Hall of Shadows.

Fair warning should be given to other classes attempting to enter the Hall of Shadows as there are plenty of stealthed rogue NPCs ready to give an unexpected beat down in addition to the visible ones.

Chamber of Shadows
Add a image to this gallery 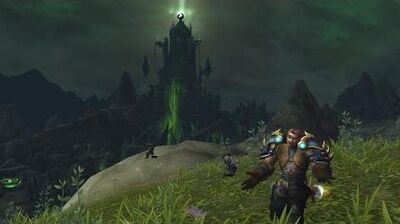 The Story of The Rogue Order Hall Campaign Lore
Dec 11, 2016 By Nobbel; WARNING: Massive spoilers
Add a image to this gallery

Retrieved from "https://wowwiki.fandom.com/wiki/Hall_of_Shadows?oldid=2827193"
Community content is available under CC-BY-SA unless otherwise noted.