Leader of the Howling Oak

Alive
Gwen Armstead was the mayor of the town of Duskhaven[37.2, 65.1] in Gilneas. She is involved in several quests throughout the worgen starting experience. Following those events, she resides as an innkeeper at the Howling Oak[48.2, 14.6] in the night elf capital of Darnassus, holding down the fort while King Genn Greymane is in Stormwind.

When the curse began to spread all over Gilneas, Gwen was among those that remained untouched while those she knew became the feral worgen that have began to terrorize the rest of the Gilnean inhabitants. She ventured to Gilneas City and was first seen in the Merchant Square during a worgen attack. While trying to salvage some supplies, she receives some assiatance by a Gilnean adventurer once she admits that she doesn't really know how to use her rapier weapon, but figures standing around with it looking menacing will make the worgen go elsewhere. She later travels to the Military District and eventually Greymane Court where she continues to assist in driving the worgen away.

After managing to evacuate the city with the human nobles, she travels to Duskhaven where she promoted to serve as the mayor. Although, the whole town had be evacuated when the Forsaken began their invasion under the leadership of Sylvanas Windrunner, and Gwen traveled to Stormglen where she took care of many other evacuees that escaped the terrible Shattering. When spiders were lurking about in the town, Gwen sends her worgen companion do deal with them. After the adventurer worked with Darius and cleared the path of Blackwald, Gwen was able to move the refugees through the woods to Tempest's Reach.

After escaping Gilneas and venturing west to Kalimdor with all the Gilnean refugees, Gwen resides at the Howling Oak in the night elf capital of Darnassus, holding down the fort while King Genn Greymane traveled to Stormwind to meet with King Varian Wrynn and his son Anduin Wrynn. Gwen aids the Guardians of Hyjal in killing the elementals at Sethria's Roost. After the job was finished, she returns to Darnassus.

Gwen Armstead at the Merchant Square in Gilnes City. 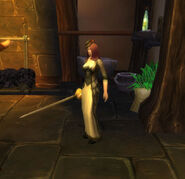 Gwen at Duskhaven during the initial phase. 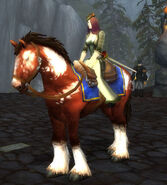 Gwen ready for the Evacuation.

Gwen aboard the carriage at Greymane Manor[28.2, 50]. Duskhaven is destroyed. 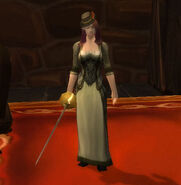 At Howling Oak, Darnassus with King Genn Greymane
Add a image to this gallery

This section needs to be cleaned up to a higher standard of quality. Reason: Needs a table with individual DB links.
Retrieved from "https://wowwiki.fandom.com/wiki/Gwen_Armstead?oldid=2837898"
Community content is available under CC-BY-SA unless otherwise noted.