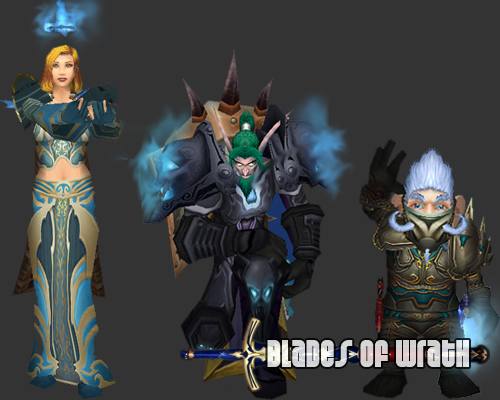 Blades of Wrath is an Alliance end-game raiding guild located on the Icecrown US server. Originating from the Torvonnilous server in Everquest, we have long since established ourselves as the premier raiding guild on Icecrown, scoring countless server firsts in every released instance to date.

Blades is always looking for hardcore and dedicated players who understand what it takes to make a guild like ours successful. We always try to be the best and overcome all the challenges the games brings us. This requires players who play a lot, who don't quit when the going gets tough, who don't bitch when we wipe, who won't find excuses to skip a raid or leave early.

Don't even bother sending us tells if you don't meet all requirements:

We raid anywhere from 4 to 6 days a week, from 8est to 12est. Between 16 and 24 hours a week. Sometimes we might push it and raid until a mob is dead. Doesn't happen often but it is a possibility. We expect an attendance of around 70% for all players. Players who can't make a raid have to post in the raid schedule forums in the appropriate thread.

If you're asking about loot, this isn't the guild for you.

We open/close recruitment for certain classes all the time. It always depends on current attendance of our members. When you apply online, we will inform you of the current situation vis-a-vis your class.

Contact an officer in game if you're 100% sure you are the right type of player for us. We like to actually talk to people in game in addition to reading applications online. If you apply and we think you'd be a good candidate, we'll contact you to join us as a recruit.

Retrieved from "https://wowwiki.fandom.com/wiki/Guild:Blades_of_Wrath_(Icecrown_US)?oldid=2817663"
Community content is available under CC-BY-SA unless otherwise noted.