Griselda was the wretched orc mistress of Turok and also the daughter of Blackhand the Destroyer. Blackhand forbade her to drink the blood of Mannoroth as a punishment for her "insolent" ways (or because she was female, it is not clear which). It is not clear when, but she soon started an affair with Turok in defiance. Blackhand was not pleased.[1] (RotH #?)

She fled with Turok into the Deadmines to plot with her new ally, disobeying her father's commands, and thus committing treason against the Horde. One of Blackhand's forces was mercilessly sent into the Deadmines in search of Griselda.

The rogue ogres of Turok were a tough match for the fearsome orc warriors, but eventually the war party reached the ruined guardhouse of Griselda and Turok who were with their personal ogre guard. In that final conflict, Turok was cut down and Griselda followed suit in her attempt to flee.

Thus, the Deadmines was cleansed of the ogre threat that had once even brought about the capture of Anduin Lothar. Blackhand had ordered the death of his daughter, and his wish had become reality. 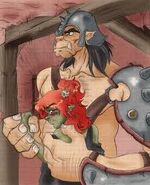 
Retrieved from "https://wowwiki.fandom.com/wiki/Griselda_Blackhand?oldid=2842960"
Community content is available under CC-BY-SA unless otherwise noted.