[28] Calling in the Reserves, and Moonhorn starts

[25] Message to Freewind Post; both will attack Alliance players on sight. Most Alliance players who are high-level enough to survive in the southern Barrens have no need to kill either NPC — once an Alliance player steps onto either elevator platform, they will stop attacking. Unlike other elevators, this pair is synchronized: when one reaches the top, the other reaches the bottom. This makes it fairly simple to time your approach from the Barrens' side: when one elevator is at the top, start riding toward the other elevator; the elevator should arrive just as you reach the end of the ramp (normal mount). In addition, both guards will hesitate before attacking Alliance players who are a significantly higher level than they are (i.e., any player who sees the level numbers in the guards' portraits as grey).

The Great Lift is no longer functioning; the floods destroyed it, but the remains still stand precariously. The Thousand Needles are now accessible only through the use of walkways carved into the mesa, and a series of rope bridges constructed by the Tauren. Travel is further complicated by the arrival of the Grimtotem who battle Horde Tauren throughout the area.

The Great Lift (destroyed)
Add a image to this gallery

The base of the Great Lift

The entrance from The Barrens

The community graveyard below 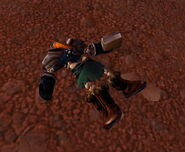 A nearby dead dwarf
Add a image to this gallery
Retrieved from "https://wowwiki.fandom.com/wiki/Great_Lift?oldid=2660264"
Community content is available under CC-BY-SA unless otherwise noted.