Grand Hamlet was a large hamlet in the kingdom of Azeroth which was razed during the orc invasion that was to become known as the First War.[1]

The story "Warrior: Divided" in Legends Volume 2 confirms that Grand Hamlet, in what was called Southern Elwynn Forest at that time, was corrupted over time by its proximity to Karazhan and later became known as Darkshire, while the area around it became known as Duskwood. 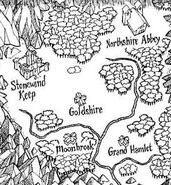 Grand Hamlet (in-game)
Add a image to this gallery

Retrieved from "https://wowwiki.fandom.com/wiki/Grand_Hamlet?oldid=2299129"
Community content is available under CC-BY-SA unless otherwise noted.