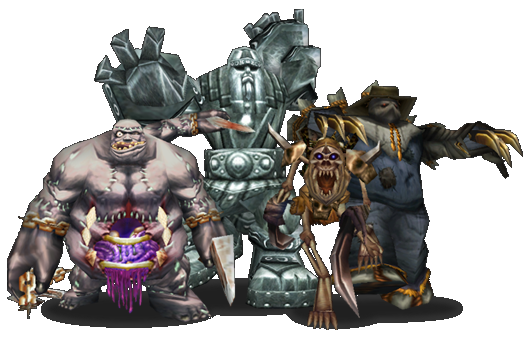 Golems are huge elemental or mechanical entities, mainly in humanoid forms, that are built generally as guardians or protectors of a person, place, or thing. Usually composed of stone or metal, they are brought to life by the elemental magic infused inside them. Most usually have Golem Oil flowing inside them like blood, but some are also mechanical. Most golems can be found in and around Dalaran, for the mages there created them to perform manual labor and guard their mystical holdings. Certain renegade wizards have also been known to create their own golems to protect their secret dens and lairs. Most golems are magically protected from spells, so that enemy mages cannot turn them against their creators. Golems are generally thought to be mindless. However, there have been documented cases of golems roaming freely, without their masters to control them. Where these vagabond constructs go or what they seek is a complete mystery.[1] (W3Man 139)

The word “golem” refers to any vaguely humanoid-shaped construct built by another creature. Golems can be found in stone, metal, straw, iron and even flesh types. In some cases, a bound elemental or eldritch magic animates the golem; other golems are purely mechanical constructs. All golems share a number of traits. As mindless, soulless constructs, they cannot feel, nor do they require food, air, or sleep. They follow orders literally and unrelentingly. Adventurers cannot reason with golems. They cannot bargain with golems. A golem is a tool, a weapon, with a specific purpose. It fulfills that purpose or dies trying. Golems are able to withstand even the harshest environments. This trait combined with their loyalty makes them excellent guardians for vaults and underground lairs. The harvest golem is one type; other types of golem undoubtedly exist.[2] (MG 85) Golems typically guard mystical dwellings. Recent reports tell of golems roaming the countryside as if independent of any masters. Some sages suspect a hybrid form of arcane magic is causing this phenomenon.[3] (WRPG 240)

Golems were featured in Warcraft III, usually as creeps.

Golems also appear in Blizzard's Diablo games, in the form of Clay, Blood, Iron and Fire Golems, summoned by Necromancers.

During the War of the Ancients, Alexstrasza made a Dragon Golem of herself to fly Krasus back to the battlefront. After the magic had worn out it collapsed.[4] (Sund 217)

Golems were one of the most powerful creeps in WarCraft III, in part because of their immunity to magic.

These types of golem do not exist in WoW, the stone golems being created by (or the designs stolen from) the Titans. Arcane guardians are the closest thing to them.

Some golems from Warcraft 3:

War Golem from Dungeons of Dalaran

Flesh Golem from Dungeons of Dalaran

Arcanite Golem from Dungeons of Dalaran 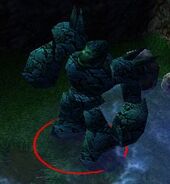 River Golem from River Arevass in Warcraft III
Lmage:
Add a image to this gallery

Runic Golems appear in the Howling Fjord & the Grizzly Hills in Northrend as well as in Ulduar.

The original meaning of the word comes from European Jewish and Medieval folklore and mysticism. A golem was an animated humanoid form, made from flesh or clay, given life and potency by holy scripts and the singular word of truth. [citation needed]

Retrieved from "https://wowwiki.fandom.com/wiki/Golem?oldid=2842169"
Community content is available under CC-BY-SA unless otherwise noted.