Were you looking for the original lore version, who became Thrall?

This article contains concerns content exclusive to the Warcraft movie or any of its sequels.

Go'el was born right after his mother, Draka emerged in Azeroth. However, possibly as a side-effect of passing through the portal, he was stillborn; Gul'dan, who assisted Draka in the birth, could not allow the first orc born in this new world to die when he noticed a nearby deer. Using the Fel, he leeched the deer of its life energy and infused it into the infant's body, bringing him back to life (and changing his skin green) before presenting the child to the war band as "A new warrior for the Horde!"

Go'el was held by his father Durotan later that night, reminding him what he was fighting for but perhaps disturbed by how his child was made to live because of the Fel.

After Durotan attempted to form an alliance with Stormwind, only for his friend Orgrim Doomhammer to betray his trust, the Frostwolf clan was purged from the Horde. Realizing what his actions had wrought, Orgrim convinced Draka to flee with her son lest they be killed by Blackhand.

Draka took Go'el and ran but was tracked down by one of Blackhand's orcs to a river. Draka placed her child in his floating crib into the water and left him in fate's hands while she stayed to hold off the orc hunting them. She managed to kill him but was dealt a fatal blow in turn, and the last thing Draka saw before dying was her only child floating away and hearing him cry.

Go'el's father Durotan would die trying to defeat Gul'dan in mak'gora only for the warlock to cheat by draining Durotan of his life energy. Orgrim claimed one of Durotan's tusks to give to his son one day.

Meanwhile, Go'el floated further down the river until he was found by a human lord. 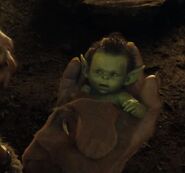 Edit to the right of the section title.
Retrieved from "https://wowwiki.fandom.com/wiki/Go%27el_(movie)?oldid=2846436"
Community content is available under CC-BY-SA unless otherwise noted.