is a wandering level 40 quest giver formerly located at Forest Song in the contested territory of Ashenvale. He has since moved to the Warsong Lumber Camp, spearheading an offensive against the Horde with help from the Sentinels after the events of the Cataclysm.

Gnarl also appears in 'Stormrage. When the Emerald Nightmare began spreading and claiming new victims, the guardians of Bough Shadow spread out in hope of helping the affected. Soon afterwards Gnarl was the only guardian left to watch over the portal. He performed his duties for days until the High Priestess Tyrande Whisperwind, the druid Broll Bearmantle, the human Lucan Foxblood and the now redeemed green dragon Eranikus came to Bough Shadow, seeking to gain access to the physical portal into the Emerald Dream.

Gnarl did his duties as guardian, fending of Eranikus from the portal by tossing huge boulders at him, still believing the green dragon to be a corrupted servant of the Nightmare. Tyrande and Broll convinced the Ancient that Eranikus now was free from the Nightmare's grip and explained that he had come to help them on their quest. Gnarl quickly agreed to let them all pass, although warning them first that the Nightmare now was a very potent danger.

As the party prepared to enter through the Portal into the Dream, shadowy figures emerged all around them, quickly followed by the corrupted spirit of Lethon. A serious battle broke out between attackers and defenders, a battle in which Eranikus quickly fled, trying his best to avoid the lurking presence of the Nightmare Lord. The battle quickly turned grim for the defenders with the green dragons withdrawal, and they were hard pressed by the shadowy invaders. Gnarl tried his best to defend his allies, but had soon enough received Lethon's attention.

The ancient struggled long and hard but was eventually dragged into the shadows. The priestess, druid and human all felt sorry for the Ancient, but was to hard pressed themselves to do anything but keep on fighting. The battle already seemed lost as the invaders kept on pouring forth, but the appearance of Alexstrasza quickly turned the fight to the defenders advantage, eventually ending the battle. But although the battle was won, the Nightmare had won a new servant in the Ancient once known as Gnarl.

Gnarl, who is covered in tree bark, is likely a reference to the singer Gnarls Barkley . 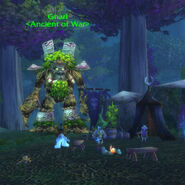 Gnarl in Cataclysm
Add a image to this gallery