Gilneas is a human nation and kingdom[1] located in the peninsula directly south of Silverpine Forest on the continent of Lordaeron. The kingdom was founded following the breaking of Arathor and is ruled by the Greymane dynasty. Besides the peninsula, the kingdom also included the island of Zul'Dare. The worgen curse has swept mercilessly across the nation, turning nearly all of its inhabitants to savage beasts. However, the denizens somehow retained their will unleashing a bloody civil war that wrecked the whole nation. After the Cataclysm, Gilneas joined the Alliance.

By the start of the Second War Gilneas was one of the most powerful human nations, and because of this, the kingdom's ruler, Genn Greymane, was not a strong supporter of the Alliance, believing that his own armies would be more than enough to deal with any threat. Despite this, Gilneas was not neutral towards the Horde, and did join the Alliance late in the Second War, although Lord Greymane constantly argued against its existence from beginning to end. Shortly after the Horde was defeated, Greymane pulled his nation's "support" from the Alliance, refusing to spend his nation's resources on keeping the orcs alive in internment camps or in rebuilding other nations devastated by the war. Greymane's isolationism may have been influenced by Daval Prestor, secretly the black dragon Deathwing in human form, who Greymane had supported to the throne of Alterac.

Sometime after the Second War, Greymane constructed the Greymane Wall — an enormous stone barrier that now separates Gilneas from Lordaeron.[2] Attempting to forever remove his nation from what he considered "other people's troubles", he barricaded Gilneas behind the wall. No one, not even other humans were allowed to enter Gilneas. Even during the Scourge's invasion of Lordaeron, while human refugees came begging to be allowed in, the Greymane Wall remained closed. Nevertheless, more refugees and other nations have entreated Gilneas for aid. These unfortunates never see a Gilnean and are easy prey for the worgen that occasionally stray south from Shadowfang Keep.[1] Gilneas has not been affected by the Scourge. Although the land connection to Gilneas is closed, ships from this self-isolated nation have been spotted throughout the world, such as the pirate ship Heedless of captain Baron Longshore. Apparently thanks to the latter, Jaina Proudmoore managed to convince a number of people from Gilneas to join her followers in their exodus to Kalimdor during the Third War. These people formed the Gilneas Brigade.

Lord Genn Greymane, a brawny warrior who is in his seventies, has ruled Gilneas for decades.

But while Greymane's efforts to stem the tide of the Scourge kept Gilneas from the grasp of the undead, the Greymane Wall inadvertently subjected the Gilneans to a dark fate all the same. They fell under the Worgen curse as did their neighbors to the north in Silverpine. Somehow, the Gilneans freed themselves of the curse, to some degree. Though not under Arugal's thrall, the people of Gilneas were still transformed into the monstous Worgen. Driven by their curse and threat from the Forsaken, Gilneas was finally driven into the Alliance's fold.

A person from Gilneas is referred to as Gilnean.[1]

Like their leader, Gilneas' people are burly and gruff. Extremely isolationist, they supported the Greymane Wall's construction. Most speak common, and have their faith in the Holy Light. Their resources are unknown.[3]

Gilneas is a cold, rainy place. Ocean surrounds the peninsula on three sides, making sea storms common. High cliffs on the shores protect Gilneas from sailors’ curious eyes. The Greymane Wall is the only evident site in Gilneas.[3][1]

Background: Despite the impending Orcish invasion, Gilneas has remained separate from the Alliance of Lordaeron. As ruler of one of the strongest human nations, Genn Greymane is convinced that his own armies can deal with any threat, and has therefore remained unmoved by Lord Lothar's pleas for unity. Despite this apparent disdain for the Alliance, the denizens of Gilneas harbor no fondness for the orcs or their allies and are prepared to meet them blade for blade.[4]

In the Warcraft III: Reign of Chaos Orc Campaign: The Invasion of Kalimdor in Chapter Three: Cry of the Warsong, one of the human factions you face has the force name Gilneas Brigade, implying that people from Gilneas traveled to Kalimdor with Jaina and are very likely still with her now.

Gilneas in World of Warcraft

Gilneas is set to be introduced in the Cataclysm expansion, as the 1-15 starting zone of the new playable Worgen race. It enters the story at the shattering of the Greymane wall, which forces the Gilneans to re-enter the conflicts they sought to escape. The threat of Forsaken attacks, and an offer of aid from the Night Elves brings Gilneas into the Alliance, which serves as a counterpart to the introduction of the Horde-allied Goblins of Kezan. In-game, Gilneas appears to be a dreary and rainy territory, reflecting the cursed nation itself. The Greymane Wall will recieve a graphical update to match the new style of Gilneas, and the design is comparable to the new human architecture seen in Wrath of the Lich King. 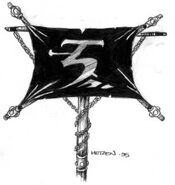 Retrieved from "https://wowwiki.fandom.com/wiki/Gilneas?oldid=1993107"
Community content is available under CC-BY-SA unless otherwise noted.