For the zone after worgen starting experience, see Ruins of Gilneas.

Gilneas (pronounced Gil-NEIGH-uhs) is a human nation and kingdom[1] located in the peninsula south-west of Silverpine Forest on the continent of Lordaeron. The kingdom was founded following the splitting of Arathor and is ruled by the House of Greymane. Besides the peninsula, the kingdom also included the island of Zul'Dare.

Gilneas is a large peninsula that juts into the sea south of western Lordaeron. Silverpine Forest lies to the north-east and Kul Tiras awaits across the sea to the south. Lord Genn Greymane never supported the Lordaeron Alliance in the Second War. Thus, after the war, he constructed the Greymane Wall: a massive barrier spanning the entire northern border. The enormous wall barricades Gilneas from Lordaeron. Gilneas does not allow anyone in or out, and no one knows what has been transpiring there since the end of the Second War.[2]

It was later found that the Worgen curse has swept mercilessly across the nation, turning nearly all of its inhabitants to savage beasts. However, the denizens somehow retained their will unleashing a bloody civil war that wrecked the whole nation. Following the Cataclysm and an invasion by the Forsaken, Gilneas has rejoined the Alliance.[3]

Following their victory in their war against the trolls, the empire of Arathor entered into a period of prosperity and growth. After the death of King Thoradin the empire began to expand, founding new city states in the wilderness - including Gilneas. Each city grew and prospered, Gilneas and Alterac developed strong armies which explored the world. Over time the power of Gilneas and the other city states grew as that of Strom waned, eventually they developed their own customs and beliefs and the empire splintered into independent kingdoms.[4]

By the start of the Second War Gilneas was one of the most powerful human nations, and because of this, the kingdom's ruler, Genn Greymane, was not a strong supporter of the Alliance, believing that his own armies would be more than enough to deal with any threat. Despite this, Gilneas was not neutral towards the Horde, and did join the Alliance late in the Second War, although Lord Greymane constantly argued against its existence from beginning to end. He never actually supported the Lordaeron Alliance in the Second War.[2] Shortly after the Horde was defeated, Greymane pulled his nation's "support" from the Alliance, refusing to spend his nation's resources on keeping the orcs alive in internment camps or in rebuilding other nations devastated by the war. Greymane's isolationism may have been influenced by Daval Prestor, secretly the black dragon Deathwing in human form, who Greymane had supported to the throne of Alterac.

Some time after the Second War, Greymane constructed the Greymane Wall — an enormous stone barrier that now separates Gilneas from Lordaeron.[5] Attempting to forever remove his nation from what he considered "other people's troubles", he barricaded Gilneas behind the wall. No one, not even other humans were allowed to enter Gilneas. Even during the Scourge's invasion of Lordaeron, while human refugees came begging to be allowed in, the Greymane Wall remained closed. Nevertheless, more refugees and other nations have entreated Gilneas for aid. These unfortunates never see a Gilnean and are easy prey for the worgen that occasionally stray south from Shadowfang Keep.[1] Gilneas has not been affected by the Scourge. Although the land connection to Gilneas is closed, ships from this self-isolated nation have been spotted throughout the world, such as the pirate ship Heedless of captain Baron Longshore.

A small group of soldiers known as the Gilneas Brigade joined the Human Expedition led by Jaina Proudmoore during the Third War, but they likely were not sent by Genn Greymane as Gilneas was secluded from the rest of Lordaeron since the end of the Second War.

Gilneas is set to be introduced in the Cataclysm expansion, as the level 1-12 starting zone of the new playable worgen race. Players enter the story as a human. The quests will teach them how the worgen curse came to be, how the humans of Gilneas came to be affected by it and lastly with the player him/herself being infected with the worgen curse[6]. Further on there will be the shattering of the Greymane Wall, which forces the Gilneans to re-enter the conflicts they sought to escape. The threat of Forsaken attacks, and an offer of aid from the night elves brings Gilneas into the Alliance, which serves as a counterpart to the introduction of the Horde-allied Goblins of Kezan. In-game, Gilneas appears to be a dreary and rainy territory, reflecting the cursed nation itself. The Greymane Wall will receive a graphical update to match the new style of Gilneas (a Victorian style).

It must also be mentioned that, much like when Quel'Thalas was introduced in World of Warcraft: The Burning Crusade, the Peninsula of Gilneas will have a considerably different landmass than it does on the current maps. Prior to the Cataclysm Gilneas appeared as a small, thin peninsula roughly the same size and shape as Silverpine Forest to the north. After the Cataclysm the Gilnean peninsula appears slightly shoter but significantly wider (even accounting for the land that sinks into the ocean during the Worgen starting experience).

While Greymane's efforts to stem the tide of the Scourge kept Gilneas from the grasp of the undead, the Greymane Wall inadvertently subjected the Gilneans to a dark fate all the same. They fell under the worgen curse as did their neighbors to the north in Silverpine. Somehow, the Gilneans freed themselves of the curse, to some degree. Though not under Arugal's thrall, the people of Gilneas were still transformed into the monstrous worgen.[3] No one had seen a Gilnean for more than ten years[5] until the Cataclysm, where it was discovered that they have been transformed into worgen, but have somehow retained their will. Driven by their curse and threat from the Forsaken, Gilneas was finally driven into the Alliance's fold.[3]

Gilneas' current state is partly unknown. Genn Greymane appears to still be alive, as he is among the first NPCs encountered by worgen players, administering a treatment for the worgen curse.[7] What is known is that worgen citizenry have escaped their curse's iron grip.[3] However, Brann Bronzebeard 's rumours about the Naga[1] have not been proven untrue.

One of the new battlegrounds in Cataclysm will be called Battle for Gilneas, likely featuring the ongoing siege of Gilneas by the Forsaken.[citation needed]

Outside the battleground, Horde players are sent into Gilneas from quests in Silverpine to stop the worgen and fortify their hold on the kingdom.

Gilneas is located on the peninsula south of Silverpine Forest.

The human kingdom had supported the Alliance during the Second War, but King Greymane had no qualms about severing all ties to the outside world when it became clear that the Alliance needed Gilneas more than Gilneas needed the Alliance. Unbeknownst to the rest of the world, darkness fell on Gilneas after the Greymane Wall's gates had been closed, and the worgen curse ravaged the nation. Before long, Gilneans were fighting against Gilneans in a bloody civil war that left the kingdom in tatters. Remarkably, the people of Gilneas have somehow managed to hold on to the last vestiges of their humanity... for now.

A person from Gilneas is referred to as Gilnean.[1] Like their leader, Gilneas' people are burly and gruff. Extremely isolationist, they supported the Greymane Wall's construction. They speak common, and have their faith in the Holy Light. Their resources are unknown.[2] Moreover, their costumes, weapons, architecture and accents have great Victorian connotations, which along with the cold and rainy weather of the peninsula, give the feeling of being in the London of the nineteenth century.

Lord Genn Greymane, a brawny warrior who is in his seventies, has ruled Gilneas for decades.

Gilneas is a large peninsula that juts into the sea south of the western regions of Lordaeron. Silverpine Forest lies to the north-east and Kul Tiras and Crestfall await across the sea to the south and Tol'Barad stands to the east. Because of its nearness, Zul'Dare is considered part of Gilneas.

Gilneas is a cold, rainy place, mainly because The Great Sea surrounds the peninsula on three sides, making sea storms common. High cliffs on the shores protect Gilneas from sailors’ curious eyes. The Greymane Wall is the only evident site in Gilneas.[1][2]

Map of the starting area of Gilneas (as of Blizzcon 2009) 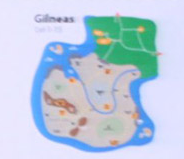 Layout of the Gilneas Peninsula (as of Blizzcon 2009) 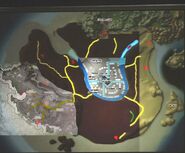 Composition of the maps known so far with the layout of the Peninsula of Gilneas.

First phase: Erosion of the southwestern coast near Duskhaven

Second phase: Duskhaven is consumed by the crumbling earth
Add a image to this gallery

The worgen curse that started from Shadowfang Keep and swept across Gilneas left its people irrevocably transformed. Almost the entire human population has been turned to the beastly worgen, a humbling failure for Genn Greymane in his efforts to keep his people safe. The reaction of the people to this change will likely be greatly varied, and has yet to be revealed. Preliminary dialogue from Cataclysm has revealed that Gilnean mages and healers went to great strides to fight the affliction.

Gilneas has undergone deep changes in the wake of its cursing, and while the people maintain their free will, the impact of the curse remains to be seen.

The forsaken, led by Dark Ranger Thyala, have begun an invasion on Gilneas.

Background: Despite the impending Orcish invasion, Gilneas has remained separate from the Alliance of Lordaeron. As ruler of one of the strongest human nations, Genn Greymane is convinced that his own armies can deal with any threat, and has therefore remained unmoved by Lord Lothar's pleas for unity. Despite this apparent disdain for the Alliance, the denizens of Gilneas harbor no fondness for the orcs or their allies and are prepared to meet them blade for blade.[8]

In the Warcraft III: Reign of Chaos Orc Campaign: The Invasion of Kalimdor in Chapter Three: Cry of the Warsong, one of the human factions you face has the force name Gilneas Brigade, implying that people from Gilneas travelled to Kalimdor with Jaina and are very likely still with her now.

Retrieved from "https://wowwiki.fandom.com/wiki/Gilneas?oldid=2436263"
Community content is available under CC-BY-SA unless otherwise noted.