Gillijim's Isle is an island in the South Seas off the coast of Stranglethorn Vale. It is south of Island of Doctor Lapidis. It is a jungle troll island that is currently not in World of Warcraft, but it appears on the World of Warcraft World Map released in 2006.

The island existed during the WoW Alpha — however, it no longer exists in-game (beyond the intro cinematic). Even though the location is currently located in empty ocean, the water in the area still bear its name on live servers.

Gilijim's Isle is well past the "Fatigue Zone" of STV but players can confirm the island's location by using a death knight's Path of Frost or a shaman's Water Walking with an epic mount, or WoW Map Viewer.

Gillijim's Isle was one of two islands located around this area, the other one being Island of Doctor Lapidis.

The name of the island is a reference to Gilligan's Island, a 1960's sitcom. 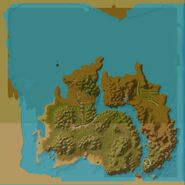 In the World of Warcraft comic
Add a image to this gallery
Retrieved from "https://wowwiki.fandom.com/wiki/Gillijim%27s_Isle?oldid=2773877"
Community content is available under CC-BY-SA unless otherwise noted.