He is a large bearish man, with thick features, and a heavy beard, a blue doll and black and gray armor.[4] He is a brawny warrior who must be in his seventies, and has ruled Gilneas for decades.[10]

Time and again, King Genn Greymane has been forced to make difficult decisions to sustain Gilneas’s well-being and autonomy. Following the Second War, he ordered the construction of the seemingly impenetrable Greymane Wall to protect his people from outside threats, effectively closing off the nation from the world and its petty conflicts. For years the wall did as intended, but when the worgen curse spread into Gilneas, the enormous barrier began to resemble the gateway to a prison rather than a sanctuary. Now, with Forsaken in nearby Silverpine Forest and the worgen curse poised to destroy everything that Genn and his forebears had labored to build, Gilneas’s proud king must do everything in his power to save his kingdom. Due to his anger over the dire situation, however, Genn’s most arduous trial ahead might be subduing his own fury before it consumes him entirely.[11]

Prior to the Second War, Greymane was among the human leaders summoned to an emergency meeting at Capital City in Lordaeron by King Terenas Menethil II. Accompanied by a group of nobles including Baron Ashbury, Lord Vincent Godfrey, and Lord Darius Crowley, the youngest and newest of the council of Lords, Greymane listened to the plight of Anduin Lothar regarding the fall of Stormwind and the threat of the orcish Horde. Greymane dismissed these concerns, stating with confidence that the Gilnean army could withstand any threat. While most of the other heads of the human nations were in agreement that an alliance against the orcish invaders was needed, Greymane was hesitant about joining, and was difficult about it.[12][13][14]

After the Second War, he was present at the meeting with other kings of the Alliance in Nethergarde. Greymane complained about the expenses of the keep, though the newly crowned King of Stormwind Varian Wrynn pointed out that a price couldn't be put on something as essential as their safety.[15]

After the betrayal of Aiden Perenolde, the ruler or Alterac, was revealed, Greymane had his eye on ruling the now-leaderless kingdom, even though he had no right to it. He supported the claim of Lord Perenolde's nephew, Isiden, to Alterac's throne.[16] Greymane almost fought with Admiral Daelin Proudmoore over the issue. Over time, due to mind control by the black dragon Deathwing, he grew to support Lord Daval Prestor (actually Deathwing in human form), in his bid for the throne. However, after Prestor vanished, Greymane continued to push Isiden's claim.

Genn was later present at Arthas Menethil's induction into the Knights of the Silver Hand ceremony in Stormwind.[17]

Lord Genn Greymane had increasing disagreements with King Terenas over increasing taxes for the Alliance and the maintenance of orcish interment camps. Thus, he constructed the Greymane Wall: a massive barrier spanning the entire northern border on the edge of Gilneas and Silverpine Forest.[18] Safe behind his wall, the only one among them who offered any help to the Alliance was Darius Crowley, who sent the Gilneas Brigade to assist Jaina Proudmoore.[19] For this, and for starting the Gilneas civil war, Greymane threw Crowley into prison.

In Wolfheart, more of the story of how the Worgen of Gilneas were introduced into the Alliance is revealed.[20] Because of Genn's boastful behavior during the Second War, King Varian Wrynn resisted accepting them, but Malfurion Stormrage and Tyrande Whisperwind both supported their bid. Genn and the cursed of Gilneas do not fully join the Alliance until an attack in Ashenvale by Garrosh Hellscream where they prove their worth.[citation needed]

In recent years, the grizzled ruler of Gilneas has suffered many hardships: his son and his nation fell to the Banshee Queen Sylvanas and her Forsaken, and he nearly lost his humanity to the worgen curse. Yet from these tragedies, Genn has found new strength and courage. He is determined to fight tooth and claw against any enemy that threatens the safety of the Alliance.

Genn Greymane made his debut in World of Warcraft: Cataclysm. He is one of the first people Worgen players meet during the spread of the Worgen Curse in Gilneas. After the player turns, Greymane saves the player from an executioner's blade by injecting them with a serum that gives them control of themselves. Genn, himself, has also been affected by the curse,[21] yet he prefers to remain in his human form most of the time.

For a short time after the fall of Gilneas (at the climax of the worgen starting experience), Greymane is present at the Howling Oak in the night elf capital of Darnassus, where the surviving Gilneans have resettled; he then journeys to Stormwind City, where he remains at the side of King Varian Wrynn in the throne room of Stormwind Keep. Gwen Armstead takes his place in Darnassus.

Genn's personality in-game seems drastically different from that shown in the novels, appearing as a kinder, understanding ruler instead of the gruff, impatient king.

The people of the Alliance remember the king of Gilneas as a proud, strong-willed, cunning, and arrogant man. He and his armies stood by the Alliance during the Second War, but in the aftermath it became clear to Genn Greymane that the Alliance needed Gilneas more than Gilneas needed the Alliance. He ordered that the Greymane Wall be closed to all outsiders, effectively sealing off his kingdom from the outside world and its conflicts.

But fate, it seems, was intent on teaching the king a lesson in humility: although the wall succeeded in isolating Gilneas from the rest of the world, it also served to damn the kingdom's people forever. As the worgen curse swept the nation and early attempts at containment failed, Greymane found himself fighting a battle for his people's very humanity.[22]

King Genn Greymane makes a brief appearance with the other leaders of the Alliance at the Shrine of Seven Stars while adventurers help Anduin Wrynn on a quest to deliver intelligence about the sha.[23]

During the assault on the Broken Isles, Genn was forced to work together with the Horde, among them his nemesis Sylvanas Windrunner. During a climactic confrontation with Gul'dan, Sylvanas called for a Horde retreat, leaving the Alliance to face the Legion onslaught alone. Angered and disgusted by the Horde's betrayal, Genn called for a retreat as well. During the retreat, Varian Wrynn gave his life in order to ensure the Alliance forces could flee to safety. Before he died, he entrusted Genn with a letter for his son.

Upon returning to Stormwind, Genn found himself unable to face Anduin or attend Varian's funeral. He instead charged an adventurer with delivering the note, while he channeled his rage into preparing the Alliance forces for the coming battles with the Legion.

As part of the continuing conflict in the Broken Isles, Genn battled Sylvanas,[24] now Warchief of the Horde,[25] on the deck of the Skyfire off the coast of Stormheim near the Maw of Nashal.[26] Genn also confronts Sylvanas in the Vault of Eyir.[27]

Genn is present when Alonsus Faol and Calia Menethil bring their idea to Anduin Wrynn for humans and Forsaken to meet in Arathi Highlands in an attempt to reunite families. He is strongly against the idea, and further enraged by the appearance of Alonsus, for he views him as nothing but a monstrosity. His views on the Forsaken and Alonsus in particular do not waver until he sees the meeting for himself - happy reunions and also heartbreaking shunning - for neither extreme of those meetings results in bloodshed. It opens his mind to the possibility of peace, but Sylvanas's actions in killing her own people at the end of the meeting cement his hatred for her.

Like Anduin and his other advisors, Genn is completely caught off-guard when the Horde infiltrate and then attack Ashenvale. He is forced to remain in Stormwind to help night elf refugees from Teldrassil and Darnassus, though his wife, Mia Greymane, portals to the kaldorei capital directly to help the innocents there. During the entirety of the War of the Thorns he remains highly concerned about her well-being as the situation grows from bad to worse, eventually disobeying a direct order from Anduin to portal into Darnassus when it becomes apparent Teldrassil has been set ablaze. He helps to rescue Mia before becoming the last person alive to see Darnassus.

Genn, enraged at Sylvanas's genocide, accompanies Anduin in the Battle for Lordaeron. Their troops put up a valiant fight, but Sylvanas unleashes the blight upon them. It is only through the sudden intervention of Jaina Proudmoore that they are able to push through, fighting their way to the throne room itself and a waiting Sylvanas. Springing her last blight trap, she manages to evade capture, and Jaina teleports the Alliance leadership to safety.

Krennan Aranas says: I'm not giving up on you, <player>. I don't have a cure for the Curse yet... but there are treatments. You'll have control again.
Lord Godfrey says: Give it up, Krennan. It's time to put this one down. It's protocol.
King Genn Greymane says: Tell me, Godfrey. Those that stayed in Gilneas City so that we could live. Were they following protocol?
King Genn Greymane says: I didn't think so. Now hand me that potion, Krennan... and double the dosage. 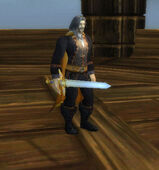 Genn within his observatory at Greymane Manor. 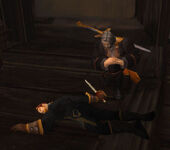 Genn over the body of his son, Liam, within Greymane Court

Genn Greymane on his horse

Genn Greymane on the Skyfire 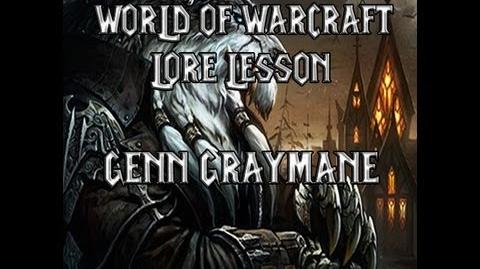 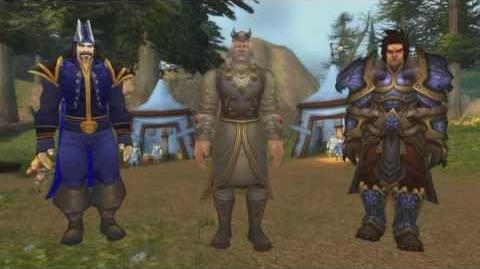 Retrieved from "https://wowwiki.fandom.com/wiki/Genn_Greymane?oldid=2854800"
Community content is available under CC-BY-SA unless otherwise noted.