High Tinker Gelbin Mekkatorque, King of Gnomes, is the current leader of the gnomish evacuees from Gnomeregan.

The gnomes have not had a proper king or queen for over four hundred years. Instead, they prefer to elect their highest officials for set terms of service.[1][2][3] The highest office in Gnomeregan, High Tinker, has been held by the crafty Gelbin Mekkatorque for the past seven to nine years. Gelbin is one of the most renowned inventors ever (his invention include the Mechanostrider mounts, the repair bot, and the [Gyromatic Micro-Adjustor]),[4] and has been honored as a just and skillful leader. While in office, High Tinkers are allowed to hold grand titles but only hold their power for set terms of office, after which they return to the work force. Gelbin Mekkatorque's beloved companion, Captain Tread Sparknozzle, has served him well for many years, working as the "High Tinker's Advisor". Mekkatorque took on the title "King of the Gnomes" after the fall of Gnomeregan.[2][5].[6]

However, when the troggs began their invasion of Gnomeregan, Gelbin was unprepared to stop them. At the behest of his top adviser, Mekgineer Sicco Thermaplugg, he ordered that the city be bathed in toxic radiation. So the radiation bomb was released.[2][5][3] Though the radiation stopped the troggs' advance, it ultimately killed more gnomes than troggs. Now the High Tinker carries the weight of the dead on his shoulders and seeks to avenge his people by reclaiming their lost city.[7]

Mekkatorque spends the overwhelming majority of his time working on plans to retake Gnomeregan, knowing that many of his people are still trapped inside with no means of escape. While he appreciates the hospitality of the dwarves, Ironforge is too small for both races, at least in the long term. In addition to his efforts to retake Gnomeregan, Mekkatorque works with the dwarves on a regular basis to perfect new military technology and strategies. He is partially responsible for the new models of dwarven flying machines being sent into the field, but his people are too few to make much more of a contribution to the Alliance at this time. Mekkatorque has also assigned a team to researching anti-Scourge weaponry, knowing that an undead attack is imminent.[6]

He was one of the members of two pairs of gnomes that are credited with the construction of the Deeprun Tram, a fast running form of transportation between Ironforge and Stormwind.[8] Gnomish inventors organize into pairs, an odd crazy-guy/sane-guy relationship. One is always trying to push the limits of his devices to unknowable extremes while the other does everything he can to keep the invention from becoming disastrous. It was two pairings of just this type that created the underground railroad that connects Ironforge to Stormwind Keep.[2] It is however unclear of which member Gelbin represented in his pair, the "crazy" one, or the "sane" one.

Construction of the mechanostrider Edit

The mechanostrider mount was Mekkatorque's first major invention, and has served as a vital part in the gnomish society.

On one early morning, Gelbin was wandering through the wondrous peaks of Dun Morogh. He spied on a flock of tallstriders and remarked upon their grace and strength. He became fascinated with their fluidity and soon developed a mechanized version, perfect for the minuscule gnomes to use as mounts. Soon after was born the mechanostrider, which quickly became a favorite mount of all gnome-kind. Using steam compression and duro-steel plating, the finest gnomish tinkers created these ostrich-like striders to use as mounts. The mechanostrider can move at speeds up to 30 mph.

This section concerns content exclusive to World of Warcraft.High Tinker Gelbin Mekkatorque is a boss and quest giver located in Tinker Town in the dwarf city of Ironforge.

He starts the quest

During Brewfest, Mekkatorque will ride out of the city to the festival grounds at 6 A.M. and 6 P.M. each day for the ceremonial tapping of the keg. Players present when he does this will receive a 2 hour Brewfest Enthusiast buff that increases XP gained by 10%.

The Liberation of Gnomeregan Edit

During the Operation: Gnomeregan event leading up to Cataclysm, Mekkatorque led the gnomes and their allies in an attempt to retake his beloved city from Thermaplugg and his minions.

This section concerns content exclusive to Cataclysm.Since the release of the expansion World of Warcraft: Cataclysm, High Tinker Mekkatorque can be found under a tent in Gnomeregan. He is present at the Elemental Invasion meeting.

Sometime either just before or during the Shattering, he recently fought with Thermaplugg during a visit to his old quarters in Gnomeregan. Using his adaptive nature he severed Thermaplugg's legs using a trap Thermaplugg had set himself. It is debated upon whether Thermaplugg is actually dead, or if he survived the encounter.

This section concerns content exclusive to Mists of Pandaria.Gelbin led gnomish forces to The Underhold to aid the Alliance.

Victory for the Alliance! Before we clear out of here, my people will grab as much of this crazy goblin technology as we can get our hands on.

I have nothing to say to you, <race>.

This section concerns content exclusive to Legion.Gelbin ordered his people to prepare for war against the Legion. Which led to finding of gnome hunters.

Gelbin was present on the Battle on the Broken Shore along with the other Alliance heroes.

He appears in a cinematic in the Broken Shore, driving the Mekkatorque Suit, and blasting demons with mechanical weaponry.

One of the easier racial leaders to kill. It's best for the horde to buff up in the Deeprun Tram and then have a tank charge in to Gelbin. The fight is rather easy, just Tank & spank and deal with the guards. He yields no honor if killed. As he is not part of For The Horde, he is unguarded and not required to kill, however due to his location outside the tram he may aggro on groups using it to get to or from Ironforge. Killing Gelbin can also present a threat to the raid, party. Ironforge is, next to Stormwind, the most populated Alliance city, so taking the time to kill him will undoubtedly give Alliance players time to get ready, or mass and attack the raid party during the battle.

This section concerns content exclusive to the Warcraft novels or short stories.Gelbin Mekkatorque features as the main character in the short story "Cut Short" written by Cameron Dayton as part of Blizzard's 'Leaders of Azeroth' short story series. 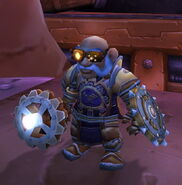 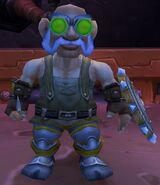 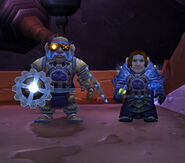 Mekkatorque as he appears in Cataclysm

Gelbin Mekkatorque in Heroes of the Storm

Gelbin in all ages and apperences. Fan art by Assey Westfall

Gelbin Mekkatorque in Hearthstone: Heroes of Warcraft
Add a image to this gallery

At last it is time for the exiled gnomes to return.
Once again Gnomeregan will be our home!

What is going on here?

The dwarves have kept us safe in their home for some time now, and for that we thank them. However, the traitorous Thermaplugg's occupation of our home must at last come to an end.
Gnomeregan has festered beneath the atomic weight of our ill-conceived plan for too long. The detonation of the radiation bombs drove us from our city, but now we possess the technology to take it back!
We will regain what is ours... and bring Thermaplugg to justice!

What is your plan?

Operation: Gnomeregan is divided into a number of phases:
First, we must retake the air tower. This will allow our planes to give us air support as we move towards Gnomeregan's main entrance.
In addition, a cache of mechanized Battle Suits was discovered in one of the nearby buildings. Once we have those suits, our assault on the entrance should be unstoppable.
Then, we go straight for Thermaplugg in the heart of Gnomeregan!

Retrieved from "https://wowwiki.fandom.com/wiki/Gelbin_Mekkatorque?oldid=2856314"
Community content is available under CC-BY-SA unless otherwise noted.