Gazlowe is a level 60 quest giver located in Ratchet [63, 36] in the Horde-aligned territory of the Barrens. Although he is shown as a group of goblins in Warcraft III: The Frozen Throne, he is only one person. He is the leader of Ratchet in World of Warcraft.

He is voiced by Travis Willingham.

In his younger days, Gazlowe; like many goblins was a thief. Through adventuring, he gradually managed to make enough money to begin legitimate business, and proved to excel at it.[1] (LoM 30)

In Warcraft Adventures, after the Second War, Gazlowe would have been an ally of Thrall, and helped him travel around the Eastern Kingdoms after his escape from the internment camp by fixing a zeppelin. It would have involved a Samophlange.

The Founding of Durotar Edit

After the Third War, he was hired by Thrall as the chief engineer to help secure a reliable source of water for the newly constructed Orgrimmar city. Gazlowe sent an expedition to dig out some tunnels beneath the city, they looked for underground wells for use in the newly founded city, but they accidentally tunneled into a den of kobolds who immediately flooded into the caves and drove the goblin mining teams into retreat.

Later, when Rexxar was looking to earn his keep in Orgrimmar, Gazlowe sent him into the dug tunnels, the Orgrimmar Tunnels, to help collapse the off-shoot tunnels which the kobolds were using. When Rexxar did so, Gazlowe rewarded him with some magical items.[2] Gazlowe and his engineers also dug out other tunnels where they found an unexplored city, they call that place Gazlowe's Excavation Site.[3]

Now, at the age of 40, he runs one of the largest and most successful port towns in Kalimdor — if not the entire globe. While Gazlowe’s city operates under the watchful eyes of the trade princes, he has considerable free reign, and proves effective because of it. A well-respected member of the goblin community, he also has a good heart, and is willing to help someone for little in return on occasion — but he wouldn’t mind payback later, of course. This goblin's smile looks almost friendly, but for his sharp teeth.[1] (LoM 30)

Gazlowe now resides in Ratchet as the manager of the port trading operation. He ships and receives to and from Booty Bay and Undermine.

He sent Rezlak, one of his boys, to Durotar to help the orcs.[4] Baron Revilgaz sent a 99-Year-Old Port to Gazlowe as a gift, however it was stolen by Mad Magglish.[5]

Gazlowe is mentioned by an Irradiated Manager, his name is used as an expression of surprise.[6]

He is also mentioned in

[66] I Must Have Them!. His breath is apparently foul.

In Cataclysm, it is apparent that Gazlowe wants to remain neutral, but won't stand for being cheated. He will be giving new quests to Horde players:

Gazlowe helped Thrall in building the Frostwall garrison. In the early developments, Gazlowe gave the commander tasks to prepare the land for building.

Gazlowe takes the role of a melee specialist, placing immobile temporary turrets and throwing timed bombs. He can become temporarily immobile to slowly charge a powerful long range laser. He has the choice of a Robo-goblin transformation that massively increases his effectiveness versus non-heroes or a Gravity Bomb which will pull all enemies to the center after a short pause. 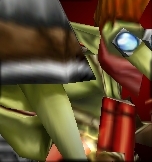 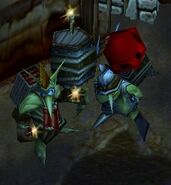 Gazlowe in Heroes of the Storm 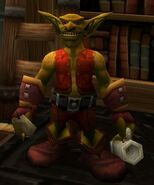 Gazlowe's old model
Add a image to this gallery

Retrieved from "https://wowwiki.fandom.com/wiki/Gazlowe?oldid=2843690"
Community content is available under CC-BY-SA unless otherwise noted.