The Frozen Throne (aka Throne Chamber or Lich King's Throne Chamber) was the receptacle of the soul of the Elder Shaman Ner'zhul following his transformation into the dreaded Lich King. Arthas climbed the steps of the throne on his way to the Lich King. After he shattered the top of the throne, the remnants now serve as the actual physical throne of the new Lich King created from the fusion of the souls of Arthas and Ner'zhul.

The Lich King sits on the Frozen Throne at the bottom of the rift, inside of the Icecrown Citadel. Four stone obelisks carved with runes of powerful magic surround the Frozen Throne. Bridges of pale blue, translucent energy stretch from the obelisk platforms to the Frozen Throne. Jets of frost periodically spew blue flames into the air, and there are glyphs carved into the rocky ground surrounding the Frozen Throne. Whoever wishes to enter the Throne Chamber, to risk the Lich King’s wrath, must activate all four obelisks. The Frozen Throne is the heart of the Scourge and the Lich King's personal seat. This throne is the remains of the block of ice that first brought Ner’zhul to Azeroth, the same block that held him prisoner until Arthas freed the ancient orc shaman and merged with him.[1][2]

From the WarCraft III manual:

When Kil'jaeden cast Ner'zhul's icy cask back into the world of Azeroth, the hardened crystal streaked across the night sky and smashed into the desolate arctic continent of Northrend, burying itself deep within the Icecrown glacier. The frozen crystal, warped and scarred by its violent descent, came to resemble a throne, and Ner'zhul's vengeful spirit soon stirred within it. From the confines of the Frozen Throne, Ner'zhul began to reach out his vast consciousness and touch the minds of Northrend's native inhabitants.

The term "Frozen Throne" literally applies to this crystal, about the size of a tauren in full armor. Kil'jaeden crafted the original from ice in the Twisting Nether[3] (which was massive — probably about the size of a decent castle) to house Ner'zhul's (now the Lich King's) soul. The harsh entry into Azerothian airspace and the impact with the glacier greatly reduced its size.

Illidan Stormrage was charged by Kil'jaeden with destroying it, and to this end recovered the Eye of Sargeras and brought it to Dalaran. Illidan and his Summoners used the Eye, combined with Dalaran's natural magical energies, to send devastating earthquakes to destroy Icecrown and the Frozen Throne. The intervention of his brother Malfurion, his former jailer Maiev Shadowsong, and Prince Kael'thas stopped Illidan from succeeding, and he fled.

Kil'jaeden ordered a second attempt and so Illidan, along with his enemies-turned-servants the Blood Elves and Lady Vashj with her Naga, personally invaded Icecrown so that Illidan could smash the Throne in person.

Illidan again failed, and Arthas smashed the Throne — releasing Ner'zhul's spirit and forcing the two to merge into the new Lich King. "Frozen Throne" now most nearly means the remnants of the crystal that Arthas physically sits upon, as an actual throne.

In the second expansion Wrath of the Lich King, the Frozen Throne serves as the final subzone of the Icecrown Citadel raid, where the Lich King is encountered. It is also where Bolvar Fordragon is imprisoned as the new Lich King.

The exact description of the original Throne Chamber before its destruction has differed in four sources. In Warcraft III: The Frozen Throne, it was described as lying within the frozen peak at the center of the valley in Icecrown, and indeed we actually got to see said peak during the cutscene and the mission. The RPG describes it as sitting at the bottom of a rift made upon impact, conflicting with The Frozen Throne in that no "frozen peak" is mentioned. The novel Arthas: Rise of the Lich King implies that the Throne Chamber was deep inside a cavern within the Icecrown Glacier itself, which sat in the middle of a valley; a description that seems to have been an attempt to merge the previous two descriptions.

Even more confusing is the short story Road to Damnation, which doesn't make reference to the cavern or rift (although the "very peak of Icecrown" is mentioned) but instead describes the Frozen Throne as sitting inside a massive chamber inside a citadel, years before the actual Icecrown Citadel was supposed to have been built. While at first it appears to have been a discrepancy, it could be a reference to the overall fortified nature of the Throne Chamber.

Therefore, given the details, it can be speculated that the "valley" is the rift itself, and that at the center there was a frozen mountain, inside which was a huge cavern with the Frozen Throne at the center. The mountain, which also boasted the infamous Icecrown Glacier, was then fortified by the fledgling Scourge and became the first Icecrown Citadel. This would account for the passage in "The Lich King Triumphant" where Arthas, after the merger and the Throne Chamber's collapse, "is rumored to be rebuilding the citadel of Icecrown." 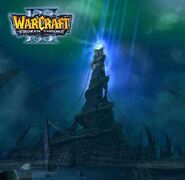 Ner'zhul the Lich King imprisoned at the top of the Frozen Throne.

Artwork of the interior of Icecrown Citadel and the spire leading up to the Frozen Throne, as seen in World of Warcraft: Wrath of the Lich King.
Add a image to this gallery

Retrieved from "https://wowwiki.fandom.com/wiki/Frozen_Throne?oldid=2837775"
Community content is available under CC-BY-SA unless otherwise noted.