Frostmourne was the final battle between Prince Arthas Menethil and the dreadlord, Mal'Ganis. It was the climax of Arthas' pursuit of the dreadlord in his quest for vengeance against Mal'Ganis' acts against the people of Lordaeron. It would see Arthas taking up the accursed runeblade, Frostmourne at the expense of his own soul and drive his cold, hungry, and exhausted forces to certain death while using the cursed sword's power to vanquish Mal'Ganis' forces and eventually the dreadlord himself. While Arthas was in his search for the runeblade, Captain Falric bravely defended the Alliance base.

Muradin angrily confronts Arthas over his betrayal of the mercenaries and his lies to his men. Arthas coldly retorts that Muradin never saw what Mal'Ganis did to his homeland. Suddenly, the undead appear on all sides. Mal'Ganis calls out to Arthas and taunts him that the journey ends here with Arthas' doom. The Alliance troops rush to defend the base, however, both Arthas and Muradin realize that they are outnumbered and completely surrounded. Arthas asks Muradin to help him find the runeblade Frostmourne. The sword's power might give them the edge they need to win this battle. Muradin, although hesitant, agrees. Arthas takes a small force of knights and riflemen with him, leaving the Captain behind to oversee the base's defenses. Arthas and his men enter a nearby Waygate which transports them to the vault of Frostmourne.

Arthas and Muradin battle through a number of vicious creatures - both living and undead to reach the Frostmourne. Finally, they arrive at the entrance to Frostmourne's chamber, where they find a powerful undead Guardian and its minions blocking the way. The Guardian warns Arthas to turn back, but Arthas refuses and engages the Guardian in battle. After a long and difficult fight which leaves only Arthas and Muradin standing, the Guardian is defeated. In its dying moments, the Guardian again warns Arthas to turn back before it's too late. Arthas asks the Guardian if it's still trying to protect the sword. The Guardian gives an ominous reply: It is trying to protect him from the sword. Arthas ignores this warning and enters Frostmourne's chamber.

Arthas and Muradin approach Frostmourne which is held on a frozen pedestal. Arthas goes to claim the sword, but Muradin notices an inscription on the pedestal: Whomsoever takes up this blade shall wield power eternal. Just as the blade rends flesh, so must power scar the spirit. Muradin realizes the sword is cursed, but Arthas replies that he would bear any curse to save his people. Muradin tries one last time to reason with Arthas, telling him to forget his quest and go home. Arthas, however, will let nothing stop him from getting his revenge on Mal'Ganis.

Arthas calls out to the spirits of the chamber and promises to pay any price if they will grant him the power to save his people. A sinister whisper answers and suddenly the pedestal explodes, releasing Frostmourne. A piece of frozen shrapnel hits Muradin, seemingly killing him. Arthas, completely unmoved by his friend's demise, tosses aside his paladin warhammer and picks up the blade.

Now in possession of Frostmourne, Arthas returns to his base where the Captain is desperately trying to hold off the undead. Arthas rallies his remaining men and leads a counterattack against Mal'Ganis. Despite suffering heavy casualties, the Alliance forces storm Mal'Ganis's base and proceed to raze it building by building. Frostmourne proves to be an incredibly powerful weapon and Arthas single-handedly slays countless undead with it. Finally, Arthas stands victorious over the ruins of Mal'Ganis's base.

Frostmourne's sinister whispering is heard again. After a moment, Arthas answers that the Dark Lord (Lich King) tells him that the time for his vengeance has come. Mal'Ganis is shocked by this statement but is unable to defend himself in time. Arthas vanquishes the dreadlord with one strike from Frostmourne. Having achieved his vengeance, Arthas abandons his remaining men and wanders off into the frozen wastelands of Northrend where he loses the rest of his sanity to Frostmourne's dark voice.

Although Arthas achieved his victory over Mal'Ganis, he had sold his soul to the Lich King. Thus the Lich King gained his most powerful servant ever. Arthas became the first of the Lich King's Death Knights. Upon returning home, Arthas murdered his own father and allowed the Scourge to devour the rest of Lordaeron. Ultimately, Arthas's quest to save his people ended with their destruction by his own hand.

You start with Arthas and the hunting team searching for Frostmourne. Stop for one minute and focus on your base, get some more troops to defend. Go with Arthas, keep spamming Holy Light on your troops to prevent anyone from dying in the hunt so you can face each and every monster guarding the cave. As you get Frostmourne, Arthas should be returning at the base, where the troops are heavily defending. Make some troops and go kill the spiders right near your base, surrounding a gold mine.It is not advised to use that gold mine unless in a terrible need of gold, as Mal'Ganis will often come there. Mal'Ganis' acolytes will go to the north Gold Mine, get some troops to guard that. With the northern gold mine safe, you can get no more than 5 peons to work there. Focus on the main base. Create a barracks there as well, and make lots of Ranged Dps such as Riflemen. Mal'Ganis' aids are a minor problem, and you should only defend your base and just focus on the dreadlord's main camp. Get a team of 10 riflemen and 5 footmen, go to attack and remember to keep Arthas at your side.The gargoyles are small problem when having ranged dps, and you can also cast Holy Light on them for a small mana fee. Destroy the guarding ziggurats which puts the undead in troubles, then clear that basement from all the undead, following the advices written.

The "Deaths" of Muradin and Mal'Ganis

Although Muradin appeared to have been killed when Frostmourne was released, it has been revealed in Wrath of the Lich King that he was merely rendered unconscious. However, when Muradin awoke he had no recollection of what had happened or even who he was. Soon after, he was taken in by the nearby frost dwarves.

Likewise, Mal'Ganis was seemingly killed by Arthas. However, Wrath of the Lich King also revealed that Mal'Ganis survived Arthas's attack, but was severely weakened and forced into hiding. Mal'Ganis is currently possessing the body of Barean Westwind and is plotting to exact his revenge upon the Lich King. 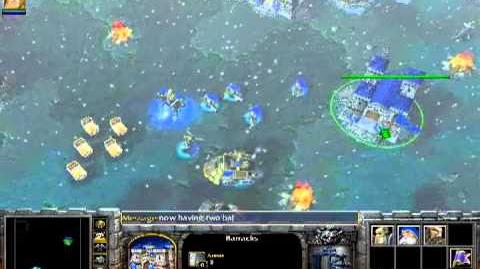 Warcraft 3 Gameplay - Human Part 9 - Frostmourne
Add a image to this gallery
Retrieved from "https://wowwiki.fandom.com/wiki/Frostmourne_(Warcraft_III)?oldid=2839975"
Community content is available under CC-BY-SA unless otherwise noted.