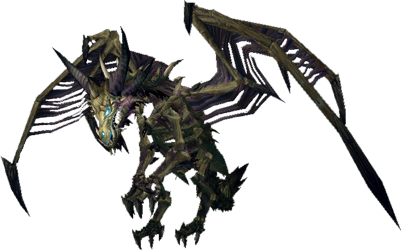 The Frostbrood are elite frost wyrms that were raised from the bones of blue dragons at Sindragosa's Fall. These frost wyrms are now one of the strongest weapons the Scourge have. They consist of Frostbrood Whelps, Drakes (Vanquishers), and the mighty wyrms themselves. Sindragosa is the leader of the Frostbrood and was the first Frostbrood raised, by the Lich King himself.

In the World of Warcraft: Wrath of the Lich King opening cinematic, Arthas raises the frost wyrm queen, Sindragosa, from her glacial ice. She then flies over the Scourge army. She was the very first Frostbrood.

Stefan Vadu is a powerful death knight affiliated with the Knights of the Ebon Blade. He is seen riding a Frostbrood Vanquisher, named Persistance. The drake is apparently free from the will of the Lich King, meaning that even frost wyrms can be freed from the Lich King's will.

Retrieved from "https://wowwiki.fandom.com/wiki/Frostbrood?oldid=2648942"
Community content is available under CC-BY-SA unless otherwise noted.