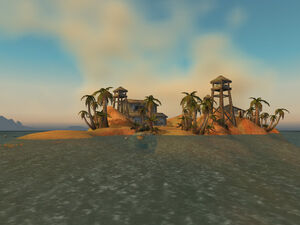 Fray Island is a small arid island located off the eastern shore of the Barrens [67.7, 48.4]. It was originally a training place for warriors of all races and creeds, led by Klannoc Macleod. A small sewer stretches the length of the island and players diving into it will be able to find several hostile fish.

In Cataclysm the Southsea Freebooters assaulted the island and are now using it as a base to assault any vessel that comes near the shore. Cap'n Garvey leads the pirates from this island, leaving Alicia Cuthbert in charge of his old flagship, the Maiden's Dagger.

The mobs on this island give reputation towards the Steamwheedle Cartel. Cap'n Garvey will give 12-13 reputation, and the other Southsea pirates will give 2-3 reputation. As these are low level and quick to rez, they are a good target for the "Insane In The Membrane" achievement.

In Tides of WarEdit

Jaina Proudmoore, after gaining the Focusing Iris and learning how to use the device, landed on Fray Island to begin her assault on Durotar and Orgrimmar. The pirates, thinking her a weak damsel, made the mistake of attacking her, and she wiped them out to a man.

Interestingly, the back rooms of the house just left of the fighting ring have had the regular Barrens background music replaced by that of the Howling Fjord following the release of the Wrath of the Lich King expansion. The reason for this is that the entire building was simply copied over from Scalawag Point in Howling Fjord and the developers simply forgot to change the default music for that model.
Retrieved from "https://wowwiki.fandom.com/wiki/Fray_Island?oldid=2849093"
Community content is available under CC-BY-SA unless otherwise noted.