A master of Scourge weaponry, the forgemaster hauls stocks of saronite ore and other precious materials to the cold forges where the mechanisms of death are born. With a host of rime weapons and exotic alloys at his disposal, it could get cold in here.[1]

Forgemaster Garfrost is a flesh giant encountered in the southeast corner of the Pit of Saron, the second wing of the Frozen Halls.

His death is a requirement of the Frozen Halls storyline quest The Path to the Citadel (Alliance) / (Horde).

At the beginning of the fight, either by aggroing Garfrost himself or any of the Wrathbone Siegesmiths in the room, all of the siegesmiths will aggro and join the fight. AoE them down, then focus on Garfrost once they're dead.

Garfrost's main attack outside of basic melee is to throw saronite boulders at ranged players. The boss' boulder emote only appears above the player who actually has a boulder heading his/her way. Thrown boulders carry a large amount of kinetic energy and will both knock a player back and deal tremendous damage to anyone foolish enough to stand in its shadow.

The fight can be healing intensive due to constant party damage and line of sight/interrupt issues as healers have to dodge boulders or have one dropped between them and the tank. As such, all ranged dps should attack as melee from close behind Garfrost to allow AoE heals work effectively and cheaply. The healer should stand at a distance until one rock is thrown, then join them to avoid further boulder issues.

At 66 and 33%, Garfrost AoE stomps the instance, then jumps over to one of the two forges in his room and reforges his weapon to increase his frost damage dealt by 50% (100% in Heroic mode). While Garfrost is in his corner, the party should take the opportunity to get behind boulders until the debuff wears off. Mages should equip Mage Armor when battling Garfrost as the debuff's timer is cut in half and will usually vanish before it stacks past two.

Once everyone's debuff has worn off and is healed up, feel free to meet Garfrost in his corner. Garfrost does not lose aggro on the phase transitions, so rinse and repeat from 100% to 0.

In phase two Garfrost casts Chilling Waves in front of him. The tank (and only the tank) should be getting hit by the Chilling Waves.

After the second phase transition, Garfrost's +frost damage bonus has increased to +100% (+200% on Heroic). Garfrost will use Deep Freeze on random players in the party. Make sure the player is at full health (and shielded if possible) when the debuff wears off, as Deep Freeze hits hard.

Hits someone with a Saronite Boulder

Death
Forgemaster Garfrost yells: Garfrost hope giant underpants clean. Save boss great shame. For later.
Scourgelord Tyrannus yells: Another shall take his place. You waste your time.
Martin Victus yells: The forgemaster is dead! Get geared up men, we have a Scourgelord to kill. 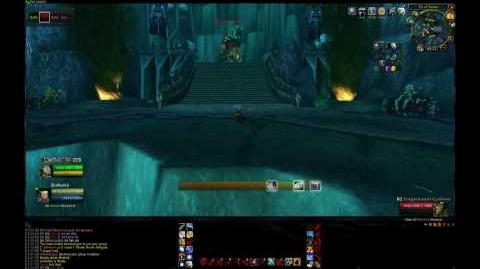