Foreman Marcrid is a rare mob human member of the Scarlet Crusade.

This section concerns content exclusive to World of Warcraft. Prior to the Shattering that Deathwing was about to cause, Foreman Marcrid served the Scarlet Crusade and was stationed in the Western Plaguelands. He appeared in the camp to the west of the Northridge Lumber Camp[47, 33]. While not all that difficult to kill, he did have some abilities that he would use against enemies that would cross his path. He has a standard cleave ability, and it also seems he has a higher chance to parry than other enemies around his level. He calls for help around his 40% health mark, so be ready for a bigger fight.

As the Shattering erupted, Marcrid was slain by Balnazzar and was raised as an undead Forsaken, making him a valuable member of the Risen. He is now found near the coast of Lake Mereldar in the Eastern Plaguelands and his level has changed from 58 to 43. 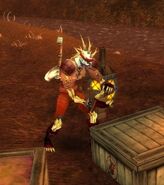 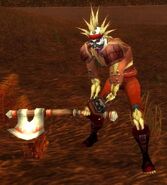 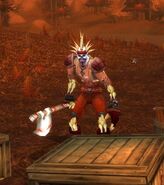 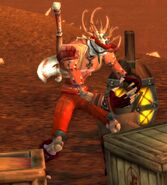 Retrieved from "https://wowwiki.fandom.com/wiki/Foreman_Marcrid?oldid=2798600"
Community content is available under CC-BY-SA unless otherwise noted.