Footmen are warriors who serve as basic infantry in armies of the human nations. Comprising the bulk of the Alliance army, the footman is the heart of the war machine for elves, humans and dwarves. Fighting in close formation, they use proven tactical methods: Advance slowly with shields raised, then draw swords and close to melee range. The grim, mud-slogging soldier initially appears to be a grizzled veteran, until you get a glimpse of his young face. His weapons and armor look worn, like they were scavenged from a battlefield. Footmen like to travel in small groups and form ranks. They are attuned to formation fighting, and coordinate their attacks. They are capable of bringing down well-armored opponents.[1] (APG 184-185)

Footmen appeared as units on the human or Alliance side in Warcraft I, Warcraft II, and Warcraft III. They are weaker than a grunt in Warcraft III, with two footmen being unable to overcome one grunt in Exodus of the Horde. They do, however, cost much less and possess greater armour.

Footmen are heavily armored soldiers, more armor than most frontline troopers and the classic counterpart to grunts.

These fighters are the backbone of the King's armies. They are foot soldiers trained in the art of melee combat using the sword and shield. Well armored for maximum defense against attacks, they can also deliver a solid blow with their double edged weapons.[2] (W1ManH 21) 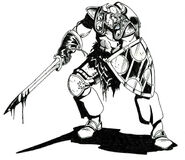 Footman from the First War.
Add a image to this gallery

Footmen are the initial line of defense against the Horde. Arrayed in hardened steel armor, they courageously wield broadsword and shield in hand-to-hand combat against their vile Orcish foes. The valorous Footmen are ever-prepared to heed the call to arms.[3] (W2Man 42)

Footman of the Alliance from the Second War.

Footman from the Warcraft II cinematics.
Add a image to this gallery

The vast ranks of the Alliance armies have been replenished since the devastating battles of the Second war. Trained in the arts of swordsmanship, the stoic footmen of the Alliance serve as Lordaeron’s first line of defense. Armed with broadswords and heavy kite shields, footmen are capable of breaking any enemy charge.[4] (W3Man 9-10)

An Alliance footman on the world of Draenor.

Footman for WC3
Add a image to this gallery

Retrieved from "https://wowwiki.fandom.com/wiki/Footman?oldid=2858802"
Community content is available under CC-BY-SA unless otherwise noted.