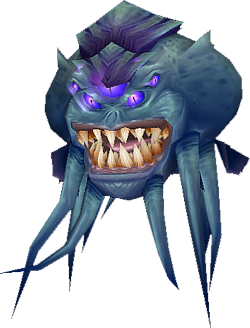 Floating eyes, also known as beholders, are monstrous creatures found in Outland. Floating eyes are only seen in specific locations, and that is probably a good thing; many adventurers are struck with fear at the sight of such odd and malevolent beings. One of the bosses inside the Blood Furnace, a wing of Hellfire Citadel, is said to be such a being. Another beholder-type boss is found in the Auchenai Crypts instance. Other than that they are only found in Netherstorm and the Death's Door subzone of Blade's Edge Mountains, but it is also known that some were jailed in the Arcatraz, now free and roaming the ship due to the mischief of Kael'thas and his followers. Whatever created these abominations is still unknown.[1] (tBCOSG 321)

They feature two rows of teeth and seven eyes. Floating eyes are demons in service to the Burning Legion, and appear to be intelligent. Interestingly, a number of eyes can be seen openly defying the Legion. Broggok and Shirrak the Dead Watcher are two examples of floating eyes that have gone rogue. This could imply that the eyes are less loyal to the Legion than other demonic species, or it could just be that Shirrak and Broggok are exceptions. Oddly, Shirrak is not actually classified as a demon, but is instead undead.

Eyes are the first demonic species that have been shown to have offspring. Young floating eyes possess only one eye, with far fewer teeth. They are also far less aggressive then their adult counterparts. You can obtain one of these offspring named Sleepy Willy during Children's Week.

Their Origins is unknown but it can be speculated due to hints and rumors. They might have created the Void terror as their minions due to their simiarlites. They are simillar to Voidwalkers in several ways, they have similar alignment and motives. They appear in Achenai Crypts in Auchindoun a very Void-populated area, this even connect them to the Darkened Naaru. If they have created the Void terror who have void in their name, even futher support this theory. They might be an "embodied" type of Voidwalkers. When a Naaru enters a dakened Void-state they suck in souls and creates more Voidwalkers.

Some ewil oganistions and other Voidwalkers uses this to creates more Voidwalkers (in Oshu'Gun for example). This is supriseingly similar to what the Mogu does. Mogu are titan constucts and Titans used Doomguard to inforce their way of life adn the Demons whe intantly force to puish doest who dwell into shuch delicious sorcery. Beholders like to taste different types of Magics. This may suggest that the Titans used Beholders the discover magics. The enslavement may have been a motivastion for them to join the legion. Algalon summoned Voidwalkers during his encounter, even supporting this theory.

Retrieved from "https://wowwiki.fandom.com/wiki/Floating_eye?oldid=2861341"
Community content is available under CC-BY-SA unless otherwise noted.