For the Karazhan mob, see Fleshbeast (mob).
Not to be confused with Flesh beast. 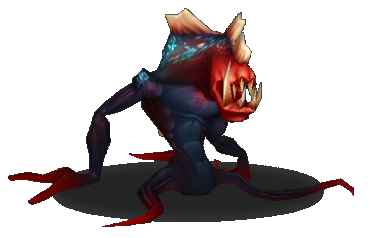 Little is known about fleshbeasts, as they have not appeared in lore until recently. However, they have recently been be found in Outland. They tend to inhabit foul places such as the Fetid Pool of Shadowmoon Valley and Access Shaft Zeon in Netherstorm. They are apparently parasitic, as evidenced in Access Shaft Zeon (where they inhabit the bodies of dead blood elves) and the Arcatraz (where adult fleshbeasts will try to infect you with their young, Protean Spawns). In Azuremyst Isle, fleshbeasts were originally small critters that were irradiated by the Exodar's radiation. There is also a fleshbeast named Forgosh <Duke of Fiends> in the Ethereum prisoner cages in Netherstorm.

The fleshbeasts in Access Shaft Zeon are a mystery to the Consortium, which has lost (both killed and missing) some of their people.

From the official Burning Crusade website: It is said that the sleep of reason produces monsters, that fantasy abandoned by sanity brings forth creatures of nightmare. For most, the horrors of their sleeping hours cannot follow them into the waking world; yet some are haunted by them even long after the veils of sleep have parted. The mindless fleshbeasts were brought into this world by Medivh, summoned from some unspeakable place beyond. Once, the wizard used the fleshbeasts in his clandestine experiments within the laboratories of Karazhan. Medivh is gone, but the slavering, hungering creatures of his twisted nightmares still remain, forever stalking the gloomy shadows of Karazhan.

Retrieved from "https://wowwiki.fandom.com/wiki/Fleshbeast?oldid=2727214"
Community content is available under CC-BY-SA unless otherwise noted.